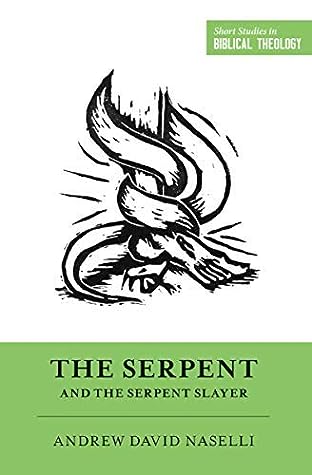 The Serpent and the Serpent Slayer. Andrew David Naselli. Edited by Dane C. Ortlund and Miles V. Van Pelt. 2020. [November] Crossway. 160 pages. [Source: Review copy]
First sentence: Who doesn’t love a good dragonslaying story? There is a reason that classic literature features such stories—we love them! But why? We love good dragonslaying stories because they echo the greatest story—the grand story of the Bible. Stories that parallel the greatest story make our hearts soar with delight. Those stories are often fiction, such as Tolkien’s The Lord of the Rings. Epic stories resonate deeply with us because they echo the greatest story. And the greatest story is true. A pithy way to summarize the Bible’s storyline is “Kill the dragon, get the girl!”
The Serpent and the Serpent Slayer is part of Crossway's Short Studies in Biblical Theology series. "Each volume in this series takes a whole Bible theme and traces it through Scripture. In this way readers not only learn about a given theme but also are given a model for how to read the Bible as a coherent whole."
This book presents the story of the Bible through the framework of the SERPENT (Satan/Devil/False Teachers) and the SERPENT SLAYER (Jesus Christ). This story begins in Genesis and ends in Revelation.
In one way it's a wee-little-book with just a few chapters.
But this wee-little-book packs a lot of BIG ideas and plenty of insights. I truly felt like he was giving me a new way to engage with Scripture and understand and appreciate it in a new way. While I had connected the dots between the deceitful snake in Genesis 3 and the dragon of Revelation, I hadn't ever really paid any attention to the in-between.
But this isn't just head-knowledge. He spends a lot of time explaining Satan's tactics and warning Christians not to slumber--to wake up and pay attention. The Bible is always, always, always relevant. I'm not arguing this book makes the Bible *more* relevant. It can't be made more relevant. But this book helped me see new things in Scripture. The Spirit used this book to open my eyes and engage with Scripture in a new way. Maybe it will be the same with other readers. I hope so.
I LOVED how Scripture-saturated this little book is!!!!
Quotes:

The Bible depicts at least six categories of the serpent’s offspring: (1) Egypt and its Pharaoh, (2) wicked leaders in Canaan and Moab, (3) the king of Babylon, (4) King Herod, (5) Pharisees and Sadducees, and (6) other false teachers.

© Becky Laney of Operation Actually Read Bible
Posted by Becky at 10:55 AM