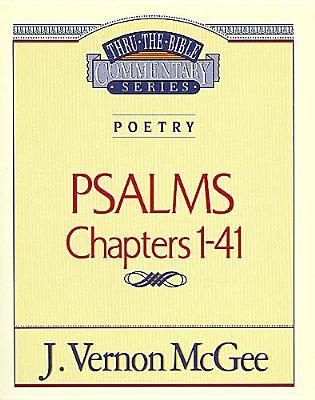 Psalms 1-41. (Thru the Bible #17) J. Vernon McGee. 1977. 224 pages. [Source: Bought]
First sentence: The title in the Hebrew means Praises or Book of Praises.
I am reading the Bible in 2020 using the daily M'Cheyne (Robert Murray M'Cheyne) plan. I thought it would add a layer of substance to in addition to the four chapters a day, to also read commentaries for those chapters. For that I am using Matthew Henry's Commentary on the Whole Bible. But the plan goes through the New Testament (and Psalms, I believe) twice. So now that I've finished Henry's commentary for the New Testament, I am tackling the New Testament commentary section of J. Vernon McGee's series.This is not my first time reading J. Vernon McGee. I've read probably twenty or so of his commentaries. Most recently Philippians and Colossians.
I love, love, love the book of Psalms. McGee does too. We are kindred spirits in that. He has some great things to say about the book of Psalms. "It is the only book which contains every experience of a human being. The Psalms run the psychological gamut. Every thought, every impulse, every emotion that sweeps over the soul is recorded in this book. That is the reason, I suppose, that it always speaks to our hearts and finds a responsive chord wherever we turn." and "The Psalms are full of Christ. There is a more complete picture of Him in the Psalms than in the Gospels. The Gospels tell us that He went to the mountain to pray, but the Psalms give us His prayer. The Gospels tell us that He was crucified, but the Psalms tell us what went on in His own heart during the Crucifixion. The Gospels tell us He went back to heaven, but the Psalms begin where the Gospels leave off and show us Christ seated in heaven." and "Christ is the subject of the Psalms. I think He is the object of praise in every one of them. I will not be able to locate Him in all of them, but that does not mean that He is not in each psalm; it only means that Vernon McGee is limited."
This commentary covers the first division of the book of Psalms.
Quotes:
© Becky Laney of Operation Actually Read Bible
Posted by Becky at 4:23 PM