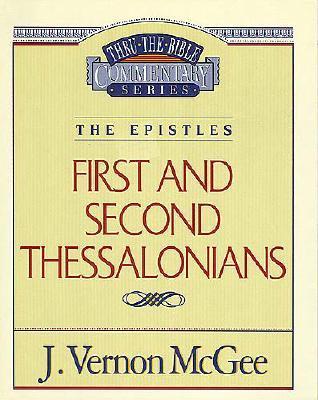 First and Second Thessalonians (Thru the Bible #49) J. Vernon McGee. 1978. 144 pages. [Source: Bought]
First sentence: This wonderful epistle is almost at the end of Paul’s epistles as far as their arrangement in the New Testament is concerned. However, it was actually the first epistle that Paul wrote. It was written by Paul in A.D. 52 or 53.
I am reading the Bible in 2020 using the daily M'Cheyne (Robert Murray M'Cheyne) plan. I thought it would add a layer of substance to in addition to the four chapters a day, to also read commentaries for those chapters. For that I am using Matthew Henry's Commentary on the Whole Bible. But the plan goes through the New Testament (and Psalms, I believe) twice. So now that I've finished Henry's commentary for the New Testament, I am tackling the New Testament commentary section of J. Vernon McGee's series.This is not my first time reading J. Vernon McGee. I've read probably twenty or so of his commentaries. Most recently Psalms 1-41.
This commentary covers both 1 Thessalonians and 2 Thessalonians. He did a great job!
While reading McGee I'm always pleasantly surprised in how TIMELY and RELEVANT his insights are. Most of the commentaries were first published in the 1970s, but it's as if he's talking to us right here, right now. Though I'm sure he'd get even harsher if he could truly witness how far we've come as a society.
Quotes from 1 Thessalonians:
2 Thessalonians Quotes:
© Becky Laney of Operation Actually Read Bible
Posted by Becky at 4:18 PM