16. Christians Get Depressed Too 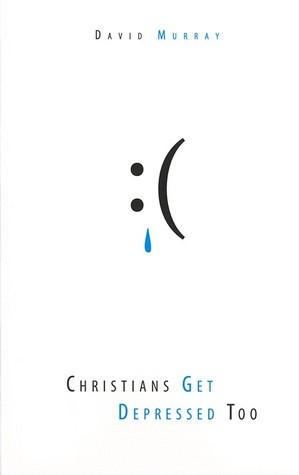 Christians Get Depressed Too. David Murray. 2010. Reformation Heritage. 112 pages. [Source: Gift]
First sentence: There are many different kinds of mental and emotional suffering. The area I am particularly concerned with here is the most common--depression. As anxiety and panic attacks are also commonly associated with depression (so much so that doctors are increasingly using the term depression-anxiety when referring to depression), much of what I write will apply to these distressing conditions also.

ETA: I have created a SPOTIFY playlist titled Christians Get Depressed Too. It is over three hours of music. You'll finish the book a LONG time before you finish the playlist. My hope is that it will prove helpful and spiritually edifying. If some of the songs seem to be stuck around this time period--before 2015--there's probably a good reason for that! These are songs that have personally built me up, encouraged me, challenged me. These songs are lived in songs.
I first reviewed this one in October 2015. Looking back, I wouldn't say it is providential that I read it when I read it, but for anyone who actually knows me, the word 2015 is enough of a trigger!!! I've got about a million spiritual lessons I learned through my trials, tribulations, and sorrows of 2015. And I do think the book helped me process some of that.
Original review follows--I couldn't really think of anything I'd change about describing the book itself.
Christians Get Depressed Too may just be the best book I've read on the subject of depression. Its strengths? Well, it's short, it's concise, it's well-organized. It tells you what you need to know and why you need to know it. It is also a very practical book. Because it is short and concise, it may not tell you absolutely everything there is to know on the subject. But if it did, it would be overwhelming and intimidating. There is something to be said for telling people clearly and precisely what they need to know first.Murray's book is divided into six chapters:In the first chapter, Murray shares eight reasons WHY believers should study the subject:I'll be honest. I didn't need all eight reasons to convince me to read the rest of the book. I include the whole list because I do believe--strongly believe--that all believers would benefit from reading this little book.In the second chapter, Murray shares two guiding principles with readers. HOW should Christians prepare themselves to study depression? Both principles are important, but, one is especially important: "avoid extremes and seek balance." Most of the chapter focuses on how depression has been perceived and how depression has been treated within the Christian community. What things have we gotten right? What things have we gotten wrong? What is the best way to think about depression? He urges us not to go to either extreme and seek balance.In the third chapter, Murray focuses on WHAT depression is--its symptoms. How does depression manifest itself in our everyday lives and in our spiritual lives? Even if the cause of a person's depression is not in any way caused by problems in our spiritual lives, the consequences of depression may effect our spiritual lives. Mainly because depression effects our thoughts and our feelings. One of the things I found most helpful in this chapter is his sharing of ten false thought patterns that "reflect, but also contribute to, the symptoms of depression." With each thought pattern, he shares an example from ordinary life, a spiritual example, and a biblical example.In the fourth chapter, Murray focuses on some of the causes of depression, and in the fifth chapter, he goes on to focus on some of the cures for depression. He presents things in balance. Not all physical. Not all spiritual.The final chapter focuses almost exclusively on caregivers--the family and friends of those suffering from depression. What can they do to help? How can they best help?
© Becky Laney of Operation Actually Read Bible
Posted by Becky at 11:13 AM