Movie Review: A Week Away 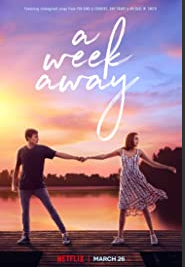 A Week Away (2021) is a new Netflix movie. I've seen some calling it a 'Christian' High School Musical. It stars Kevin Quinn, Bailee Madison, Jahbril Cook, Kat Conner Sterling, Sherri Shepherd and David Koechner.
Will Hawkins is a troubled teen almost certainly heading straight for juvie, when he receives a last chance. Would he want to go to a week-long summer camp (Bible camp at that) instead? He says yes, but, he hesitates a moment or two. But a last chance is still a chance. So the SINGING and dancing begins.
The movie's soundtrack seems to be a blend of new and old. Old songs like "The Great Adventure," "Dive," "Baby, Baby," "Place in This World," "Big House," "Awesome God," "God Only Knows," are made new. Some of these are definitely rooted in Christian music. Perhaps with the exception of Baby, Baby. I think everyone remembers that as Amy Grant's break away with Christian music. For better or worse.
Other songs like "Good Enough," "Let's Go Make a Memory," and "Best Day Ever" sounded completely new-to-me. Perhaps written for this movie? Or new enough releases that I haven't stumbled across them on Christian radio? Assuming that they have a Christian background at all.
So I would say about 98% of the movie focuses exclusively on crushes and finding "true love." The other 2% focuses on being comfortable in your skin, finding your people, and embracing life arms wide open.
There's really only one scene that comes to mind that shows any spiritual depth. The campfire dance scene where the medley Awesome God and God Only Knows is performed. The two leads--Will and Avery--sing God Only Knows reflecting where they are emotionally in their story arcs while every other camper harmonizes on Awesome God. It's a great three minutes of film. The spiritual depth comes in if and only if you accept that the characters are truly feeling and experiencing the lyrics as spiritually intended.
Perhaps I was unfair in saying that this movie is ONLY about romantic love--finding that perfectly attractive someone to fall head over heels in love with. It is also about friendship. Will becomes quite close with George. And their relationship matters significantly especially moving forward after the end credits.
But still. Most of the movie is about perfect choreography and harmony.
Is there depth to the Christian aspects of the film? The closest it comes is that one campfire scene I mentioned above. The other songs seem to be taken a little too literally with the figurative spiritual applications far, far removed. Or at least that's how I interpreted the film.
For example, Steven Curtis Chapman's song DIVE is exceedingly literal. The main character is preparing to DIVE off a literal diving platform into a literal river. And he appears to be scared of heights and unsure about those next steps.
"Big House" makes an enjoyable MONTAGE scene. Again the song is taken LITERALLY. But I don't know that I'd change a thing about its presence in the film.
I do think it would have been awesome if BREAKFAST by Newsboys had also found a way into the film!!! Surely those campers had BREAKFAST before heading out for the war games?!
Although I'm not a big fan of "Baby, Baby" by Amy Grant generally speaking, I did LOVE that it was a dream scene in this one. George, who sings lead in this one, is a bit too shy to actually woo his "love" this way.
"Great Adventure" was a song with a few changed lyrics. Either intentional or un. I do think this one could be so ambiguously interpreted that the LEADER of the song could literally be a camp leader, camp counsellor, etc.
Most of the songs have a wholesome-ish, feel-good vibe with their song and dance.
One could easily walk away from A WEEK AWAY without being one step closer to hearing the gospel. For better or worse.
What are the chances that a Netflix original would be written/directed/produced by someone who *actually* knew the gospel AND wanted to present it clearly and truthfully. No watering down. No compromising. No additions. No subtractions. Just straight up truth--risking offending viewers with subjects like sin and the wrath of God and one's actual need for an actual Savior. A true calling for repentance and belief.
Is it better to leave out the gospel than to present a false one? Maybe. Perhaps. This film isn't about Will hearing the gospel, accepting Jesus in his heart, praying a prayer, making a commitment. This isn't that film. (And I'm not saying that should be that film. I'm really not. I don't know that praying a prayer, signing a card, pledging one's life to Jesus should be part of the summer-camp-package.)
The doctrine of sin is absent from the movie, though mistakes are not. One could choose to believe that Will *will* be exposed to the gospel one way or another after the credits roll as he begins a new life. Or not. Again the focus isn't on Will becoming a child of God so much as it is on Will opening up his closed up heart again and being brave enough to let others in.
© Becky Laney of Operation Actually Read Bible
Posted by Becky at 4:49 PM