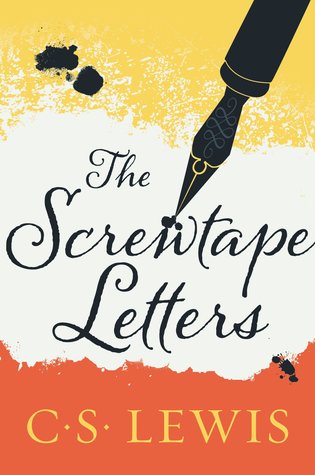 The Screwtape Letters. C.S. Lewis. 1942. 228 pages. [Source: Bought]
First paragraph: I note what you say about guiding your patient’s reading and taking care that he sees a good deal of his materialist friend. But are you not being a trifle naïf? It sounds as if you supposed that argument was the way to keep him out of the Enemy’s clutches. That might have been so if he had lived a few centuries earlier. At that time the humans still knew pretty well when a thing was proved and when it was not; and if it was proved they really believed it. They still connected thinking with doing and were prepared to alter their way of life as the result of a chain of reasoning. But what with the weekly press and other such weapons we have largely altered that. Your man has been accustomed, ever since he was a boy, to have a dozen incompatible philosophies dancing about together inside his head. He doesn’t think of doctrines as primarily “true” or “false”, but as “academic” or “practical”, “outworn” or “contemporary”, “conventional” or “ruthless”. Jargon, not argument, is your best ally in keeping him from the Church. Don’t waste time trying to make him think that materialism is true! Make him think it is strong, or stark, or courageous—that it is the philosophy of the future. That’s the sort of thing he cares about.
I definitely enjoy rereading C.S. Lewis' The Screwtape Letters every few years. These 'letters' are from 'Uncle Screwtape' to his nephew 'Wormwood.' Both Wormwood and Screwtape are demons. That should tell you a little something about this topsy-turvy Christian fantasy. Wormwood's human has just become a Christian. But with a little help from his uncle, Wormwood hopes to change that, to reverse the damage, to keep him *his*. Readers only view Screwtape's letters to Wormwood, so, we have to piece together the rest of the story, in a way. Readers can piece together that there is a world war going on. Also perhaps that Wormwood's human dies in a bomb raid. Screwtape's letters are packed with advice on how to keep Wormwood's human from being an effective Christian. How to keep him from praying, for example, to name just one. What Screwtape and Wormwood fail to understand is the futility of their efforts. True, C.S. Lewis may not have known how futile himself. Since Lewis most likely believed that one could 'fall from grace' and 'lose salvation.' But. Putting all that aside, one knows from Scripture that isn't the case.

Can believers benefit from reading Screwtape Letters? I think so. The letters are engaging, and, give readers plenty to think about. From the first letter: "Your business is to fix his attention on the stream. [The stream of immediate sense experiences]. Teach him to call it 'real life' and don't let him ask you what he means by 'real.'" (2)From the second letter: "He has not been anything like long enough with the Enemy to have any real humility yet. What he says, even on his knees, about his own sinfulness, is all parrot talk. At bottom, he still believes he has run up a very favorable credit balance in the Enemy's ledger by allowing himself to be converted, and thinks that he is showing great humility and condescension in going to church with these 'smug' commonplace neighbors at all. Keep him in that state of mind as long as you can." (6)From the third letter: "You must bring him to a condition in which he can practise self-examination for an hour without discovering any of those facts about himself which are perfectly clear to anyone who has ever lived in the same house with him or worked in the same office." (7)"It is, no doubt, impossible to prevent his praying for his mother, but we have means of rendering the prayers innocuous. Make sure that they are always very "spiritual," that he is always concerned with the state of her soul and never with her rheumatism. Two advantages will follow. In the first place, his attention will be kept on what he regards as her sins, by which, with a little guidance from you, he can be induced to mean any of her actions which are inconvenient or irritating to himself. In the second place, since his ideas about her soul will be very crude and often erroneous, he will, in some degree, be praying for an imaginary person, and it will be your task to make that imaginary person daily less and less like the real mother--the sharp-tongued old lady at the breakfast table." (8)From the fourth letter: "It is funny how mortals always picture us as putting things into their minds: in reality our best work is done by keeping things out" (11)."The simplest is to turn their gaze away from Him towards themselves." (11)From the fifth letter: "In wartime not even a human can believe that he is going to live forever." (15)From the seventh letter: "All extremes except devotion to the Enemy are to be encouraged" (20).From the ninth letter: "Never forget that when we are dealing with pleasure in its healthy and normal and satisfying form, we are, in a sense, on the Enemy's ground." (26)From the twelfth letter: "Do remember, the only thing that matters is the extent to which you separate the man from the Enemy. It does not matter how small the sins are, provided that their cumulative effect is to edge the man away from the Light and out into the Nothing....Indeed, the safest road to Hell is the gradual one--the gentle slope, soft underfoot, without sudden turnings, without milestones, without signposts." (36)From the sixteenth letter: "Surely you know that if a man can't be cured of churchgoing, the next best thing is to send him all over the neighborhood looking for the church that 'suits' him until he becomes a taster or connoisseur of churches." (46)From the nineteenth letter: "Nothing matters at all except the tendency of a given state of mind, in given circumstances, to move a particular patient at a particular moment nearer to the Enemy or nearer to us." (56-7)From the twenty-first letter: "Let him have the feeling that he starts each day as the lawful possessor of twenty-four hours." (61)From the twenty-fifth letter: "What we want, if men become Christians at all, is to keep them in the state of mind I call 'Christianity And...' (73)From the twenty-seventh letter: "Anything, even a sin, which has the total effect of moving him close up to the Enemy makes against us in the long run." (79)
© Becky Laney of Operation Actually Read Bible
Posted by Becky at 3:54 PM