In January, I wrote my first impressions of this popular (semi-popular?) Bible reading plan.
I wanted to update with my further thoughts on this system. It only took me a few weeks to realize I wanted to read more than ten chapters a day. I don't have a set number of chapters I read from each list. I do read more chapters from Old Testament lists (Pentateuch, History Books, Prophets). Sometimes I do read New Testament letters whole--Titus, etc.
But mid-March I realized a couple things, I don't like the overall organization of the system. That is I disagree with where certain books of the Bible are placed. I don't need to read Acts twelve plus times a year. I don't. You probably don't either. It's not that I feel exactly the same way about Proverbs, but the list for Wisdom books *needs* Proverbs to be included or else you're being over-exposed to books like Song of Solomon and Ecclesiastes.
So my rearranging of the lists is partly "inspired" by my own reasoning/logic and partly influenced by a post someone wrote on FaceBook. 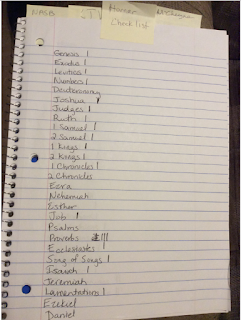 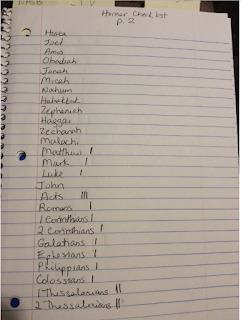 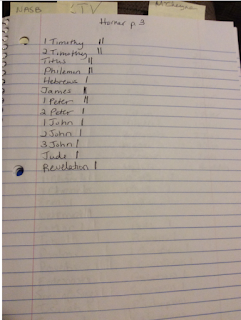 Before I switched over to the new Horner bookmarks, I wanted to document just how much had been read already.
So the new listing groups books this way:
Essentially, I eliminated the separate listings for Acts and Proverbs. I divided the major prophets from the minor prophets. I moved Ezra and Nehemiah to be with the others writing after the exile. I kept Esther with the history books. I was tempted to move her closer to Daniel. But I think I'll try her where she's at first. In the New Testament, I chose to highlight ROMANS and HEBREWS over the book of Acts. Acts is joining the gospels. I moved Revelation to be with the other major prophecy books.
Instead of typing up new bookmarks and trying to make something beautiful and/or functional. I wrote the new listings on shopping list paper. My paper is topped with pictures of strawberries. I like it.
© Becky Laney of Operation Actually Read Bible
Posted by Becky at 11:04 AM