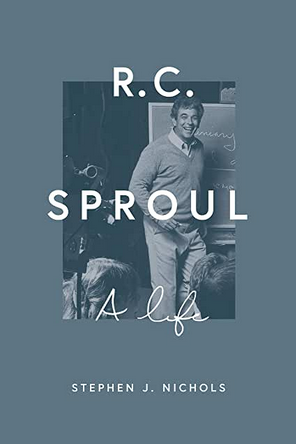 R.C. Sproul: A Life by Stephen J. Nichols. 2021. [March] 371 pages. [Source: Review copy]
First sentence from the prologue: R. C. Sproul paced and roared when he preached. But by the end of his life he needed to sit on a stool. He relied on his portable oxygen, which went with him everywhere. He struggled with the effects of COPD. He had long ago sacrificed his knees to the athletic field. The years, but especially the miles, had caught up with him. When he stepped into the pulpit, the athlete that he was burst forth. With passion his game face was on. The stool swiveled. He would clutch the edges of the pulpit, pull himself forward, and lean toward his congregation. He somehow managed still to pace while he preached.
Stephen J. Nichols has written a biography of R.C. Sproul, the founder of Ligonier Ministries. The book is without question a biography of a man (son, student, friend, husband, father, grandfather). But it is also an examination of Sproul as a theologian: preacher, teacher, author, mentor. Nichols examines Sproul's life through the lens of legacy, and perhaps letting his legacy speak for itself.
The book is framed with his final two sermons taken from Hebrews 1 and 2. The prologue places readers there in his last moments as a preacher in a pulpit, and one of the appendices is the text of his two final sermons. (There are plenty of appendices!)
The book will be of the most interest to those who are already familiar with R.C. Sproul--either through his radio broadcasts, monthly magazine Tabletalk, teaching series, preaching conferences, books, or his massive STUDY BIBLE, the Reformation Study Bible. Perhaps you're just a little familiar with his life and work, then this would be a real treat of an introduction.
I think it affirms what some already believe: that his work will continue to help, to minister, to challenge, to comfort, to guide for generations to come. Sproul can continue to be used by the Spirit to help bring souls to Christ and to help disciple new believers. His work lives on.
I loved every minute of this one! I did. I found it an enjoyable, compelling read. I loved learning more about Sproul. If you listen to enough Sproul sermons, you get a sense of his life story--his background, his childhood, his conversion, his romance and marriage, etc. But this book puts it all together as a whole and it's lovely to see it that way. Some facts felt like old friends; others were new-to-me. (Did you know he was converted by Ecclesiastes 11:3?)
There is a timeline of his life which includes his meeting the absolute love of his life when he was in first grade. (She was in second.) Also included lists of his BOOKS, teaching series, conference sermons, etc.
Quotes:

R. C. said he thinks he might be the only man in America who outsold a Fuller Brush man on a house call.

He would keep a card on his desk that read, “You are responsible to preach and to teach what the Bible says, not what you want it to say.”

Precision and clarity, not ambiguity, serve the church best in remaining faithful to its biblical, historic, and confessional roots.

Reading was a bloodsport for R. C. And that was all the more true when it came to reading the pages of Holy Writ. He was not casual in his reading or studying of the Bible.

This prompted R. C. to see that a study Bible would be a strategic tool to propagate the Reformed faith, “to help influence people in their basic education.” While the Scofield Reference Bible was the motivation. It was not the model.

Not only was R. C. Calvinist and Reformed, not only did he talk about Aristotle and Aquinas, not only did he use a lot of Latin, but he also used real chalk on a real chalkboard. He even developed a sort of Zoro-like signature move. He would emphatically dot i’s and cross t’s. And he emphatically ended a sentence with a period. And there were times, like a perfect storm, when he had an “i” to dot, a ‘t” to cross, and a period to drill into the board. You could hear the dot, slash, DOT. Zoro with a piece of chalk leaving his telltale mark. To help him, there was a live audience of about thirty people in the recording studio. There was also a lectern with some notes that he never looked at. And there was the aforementioned chalkboard. R.  C. was spending a lot of time in this studio.