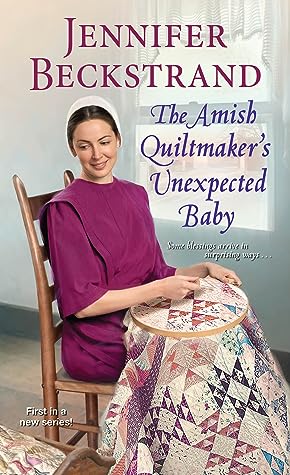 The Amish Quiltmaker's Unexpected Baby (The Amish Quiltmaker #1) Jennifer Beckstrand. 2021. 352 pages. [Source: Review copy]
First sentence: Esther Zook had four hundred and thirty-five reasons to run screaming from the house and never come back. But she wasn't really a screamer, and she'd certainly never been much of a runner.
When the novel opens, Esther Zook finds herself in a predicament. Her younger sister, Ivy, has stolen her money and left her with a young infant, Winter. Now Esther, despite being Amish, despite being thirty plus, knows absolutely nothing--N-O-T-H-I-N-G--about babies or children. So a knock on the door comes as great relief--whoever it is might know how to change a diaper. Fortunately, the knock on the door turns out to be an Amish man--a plumber--who is very good with babies. He knows what side of a baby the diaper goes on. Levi turns out to be a big part of this one--as you might expect. (Because we all know true and lasting love is just one knock away, right?! Especially when you're an old-maid spinster (by her own reckoning and the reckoning of her Amish community).
Will Esther, Levi, and baby Winter make a happy little family?! Don't expect it to be that easy. That would be like two chapters to get off that easy. No, if Esther wants a happily ever after she'll have to face plenty of obstacles to earn it.
The book is set in Colorado. Esther is newly moved to the area and still making friends. She moved there specifically to be close to her favorite Amish blogger, a fellow quilter.
I will say that while some things feel familiar about this Amish romance, it is an original journey these two go on.
It is also more than just a romance. One major element of the story is the TENSE relationship between estranged sisters Esther and Ivy.
I liked this one I did. At times it felt a little long if I'm being completely honest. I cared about the characters, but some parts of the book seemed to drag just a little.
© Becky Laney of Operation Actually Read Bible
Posted by Becky at 10:51 AM