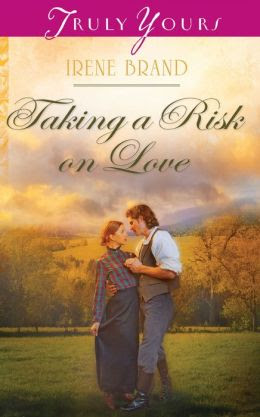 I really enjoyed the first half of Taking a Risk on Love. The book opens dramatically with Vance Bolden discovering a pregnant woman washed up on shore, a survivor of a shipwreck. He takes Evelyn Weber to his cabin and cares for her. Two people, two strangers, isolated on an island during a big storm.  He's worried that she'll go into labor, and while he's got a tiny bit of experience in delivering a baby--since he insisted on being there for his wife's delivery a decade ago--it's still not ideal. She goes into labor. They're both surprised. TWINS. The moment it's safe, once the storm has cleared and the waters are calm, he's off to get help to bring back help.

There was something lovely about these opening chapters where Evelyn and Vance are getting to know one another. Evelyn is an orphan from England on her way to North Carolina as a missionary's wife. Now that her husband is dead, she's once again alone in the world. Whether she stays in North Carolina or goes back to England, she's still "alone." As "alone" as a person can be who has newborns. Vance is a widower. He's also lost his father recently. He's decided to move from South Carolina to North Carolina. He'll be founder of a new village, Canaan. Some of his friends and family are joining him, also traveling from South Carolina. There is a wagon train of sorts from one place to another. Vance really wants Evelyn to go with him as his wife. She agrees.

Unfortunately, while the first half of this one shows promise for satisfying development and an oh-so-happy conclusion, somewhere along the way, it becomes heavy in all the wrong ways. For example, it would make perfect sense to have the characters talk about the hardships of reconstruction once or even twice. But it seems that this issue is addressed a dozen times. And reconstruction wasn't the only "issue" that got Brought Up and Discussed repetitively. It becomes all tell and no show. The characters even seem to lose some of their previous development, especially Vance. It was disappointing.