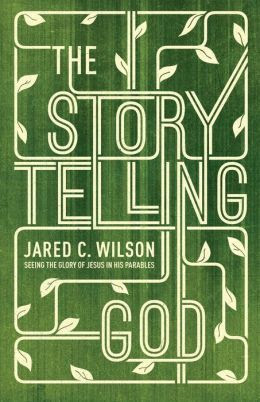 The Storytelling God: Seeing the Glory of Jesus in His Parables. Jared C. Wilson. 2014. Crossway. 192 pages.

I definitely enjoyed reading Jared C. Wilson's The Storytelling God. I selected this one for review based on this wonderful opening line: "Throw away your Flannelgraphs. They are flat and soft, and the story of Jesus is neither." Did it live up to that great first sentence? Yes and no!

In The Storytelling God, Wilson discusses parables from the Old Testament AND the New Testament, linking the two together when possible. After all, some of the imagery from the New Testament comes straight from the Old Testament. From the Old Testament, we spend some time with the prophets Ezekiel and Isaiah. There are so many parables to choose from in the New Testament. Wilson does not use each and every one. And, he doesn't discuss them in order. He approaches them topically instead. So he pulls together all the parables that have a little something to say about justice, for example, and addresses them in a single chapter. I don't doubt this makes sense for the greatest number of readers, but, part of me was a little disappointed in the arrangement. That disappointment did not effect my overall opinion of the book, however! I am not that picky!

I had two chapters that I just LOVED above all the rest. One chapter was "Three Times Found" which focuses on Luke 15. The other chapter was "Jesus the Living Parable" which focused on the seven "I Am" statements from the gospel of John. My third favorite chapter, and, yes, I think it's worth the special mention, was "The Dreadfulness of Death after Death." I loved this chapter because it was honest and bold. The message is very much needed today, I fear.

Overall, I would definitely recommend Jared Wilson's The Storytelling God. I found it accessible and relevant.

Some of these narratives are only a few lines long, but every parable, long or short, is fathoms deep and designed to drive us to Jesus in awe, need, faith, and worship.

From the fall of mankind onward, the Scriptures show us the breakdown between man and God, man and man, and man and the created world.

The way some people read the parables reminds me of Aesop's Fables. And the way others read them reminds me of the way some discern clue after perplexing clue in their Beatle albums as evidence for a cover-up of Paul's having died in a car accident.

Once upon a time, a king came to earth to tell stories, and the stories contained the mystery of eternal life.

He is no fool who believes the man who knows everything.

We are no more secure in Christ with a strong faith than with a small faith, so long as that small faith is true faith.

Because the frightening thing is that, to enter hell, all one has to do is nothing.

Preaching hell in the context of the gospel is not hate.

Do all roads lead to the same place? Yes: the judgment seat of Christ, where there lies a great fork. Two ways diverge at Jesus. One leads to the Father, the other to everlasting judgment.

© Becky Laney of Operation Actually Read Bible
Posted by Becky at 11:00 AM

I would love to read this book. I just heard about it.

I hadn't heard of this before, but I think it's one I would get a lot out of. Thanks for the review.