Book Review: God in the Whirlwind 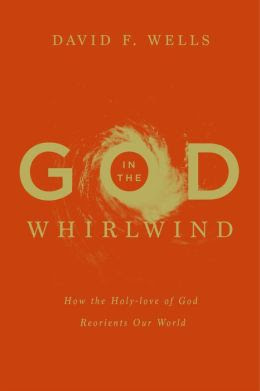 God in the Whirlwind: How the Holy-love of God Reorients Our World. David F. Wells. 2014. Crossway. 272 pages. [Source: Library]

I appreciated the premise of God in the Whirlwind. In chapter one, Wells writes,


In this book, we are on a journey. Our destination is a well-known place. It is the character of God. We are taking a journey into "the Father's heart," as A.W. Tozer put it. It is here that we find our home, our resting place, our joy, our hope, and our strength.
The goal of Christ's redemption was, after all, that we might know God, love him, serve him, enjoy him, and glorify him forever. This is, indeed, our chief end. It was for this end that Christ came, was incarnate, died in our place, and was raised for our justification. It was that we might know God. (15)

He sets out not to explore all of God's attributes, but, to explore two thoroughly: God's holiness and God's love. He likes the term (though I'm not especially fond of it) holy-love. In the context of arriving at the character of God, of exploring these two crucial aspects of God's character, he presents the gospel and discusses various aspects of the christian life. In many ways, God in the Whirlwind covers the basics.

I would definitely recommend God in the Whirlwind.


We are here to know him as he is and not as we want him to be. The local church is the place where we should be learning about this, and God's Word is the means by which we can do so. (33)

The Holy Spirit re-speaks Scripture's truth to us today and opens our minds and hearts to receive it. Thus we are given, not just a view of God and of ourselves, but the view. And not just the right and true view. We are given God himself, who comes to us through his Word by the work of the Holy Spirit. It is God who makes us knowers of himself. (33)

Adam, we know, was created to be God-centered in his thoughts, God-fearing in his heart, and God-honoring in all that he did. But of course he fell, and his vision of God was lost, as was his understanding of his place in God's world. It is this vision, this goal, that is being restored by Christ in those who are his. (42)

God's love descends to us. His is the initiative from first to last. When he took action on our sin, it was his love that offered up his Son to be the Mediator between himself and sinners. It was his love that sent the Holy Spirit to open sinners' eyes to understand the meaning of that gift. We could not make our way back to him, so he made his way down to us. (81)

If the greatest commandment is to love God with our whole being, then to come to him in worship is a duty central to living out that love. Worship is primarily an expression of the worth of God. It is primarily for God and about God; it is not primarily for ourselves and for our needs. (113)

There is a distinction between the crucifixion and the cross. The former was a particularly barbaric way of carrying out an execution, and it was the method of execution that Jesus endured. The latter, as the New Testament speaks of it, has to do with the mysterious exchange that took place in Christ's death, an exchange of our sin for his righteousness. It was there that judgment fell on the One who is also our Judge. Indeed, he who had made all of creation was dishonored in the very creation he had made. And yet, through this dark moment, this fierce judgment, through this dishonor, there now shines the light of God's triumph over sin, death, and the Devil. And in this moment, this moment of Jesus' judgment-death, God was revealed in his holy-love as nowhere else. This however, was not seen from the outside… That is why dramatic presentations of Christ's death so often miss the point. They give us the crucifixion, not the cross. They show the horrifying circumstances of his death. These circumstances may be shown accurately. But this can take us only so far… The crucifixion without the cross is an incomplete picture, a half-told story. (130)

That God has thus planned our redemption from all eternity delivers a declaration louder than any thunderclap. It is that he is for us, that he has always been for us. He was for us in the far reaches of eternity. It was there that he took thought of us even before we existed. It was there that he planned to act for us. This plan was there from the very beginning. He planned to do this knowing that once we fell into the disorder of sin our fist would be raised against him. But his grace preceded us. (135)

Christ, who made our sin his own, entered a place that should have been ours. He entered our existence and made it his own. He entered our world and made our plight his own. He took up our cause. He took up what was not properly his so that we might have that to which we have no right. He stood before God, at the cross, as our representative. He tasted death for us by dying in our place. In a strange and beautiful paradox, he who is our Judge submitted to the penalty for our sin. And in this moment, this moment of judgment, our sin was no longer ours. It became his. That righteousness which was and is his became ours by a transfer that is as mysterious as it is real. (139)

Nothing is more important to our understanding of worship than this: we come to the Lord, not because it is our idea to do so, or because we need to do so, or even because we like to do so, but because he first came to us. Worship is our response to what he has done. (202)