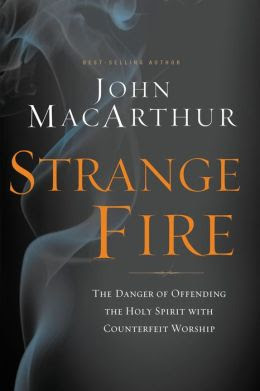 Strange Fire is a great read: compelling and intense and not without controversy perhaps. In Strange Fire, John MacArthur discusses the charismatic movement, past and present. It focuses on several aspects of the charismatic movement including the prosperity gospel and the word of faith movement. He mentions ministries, preachers, and authors. He documents his argument well: thousands of citations, backing up his statements with thousands of proofs. These little details, when combined, add up to a very telling big picture that is hard to ignore. Yes, MacArthur makes some very generalized statements in this one, especially in the introduction and the conclusion, statements that could easily offend: especially when taken completely out of context, but, even within context, there's a good risk that his message will be taken as too harsh. But when MacArthur moves into specifics looking closely, very closely, at the charismatic movement, his argument becomes more persuasive perhaps.

In the first section of Strange Fire, MacArthur introduces his reader to the subject, a brief examination of the charismatic movement past and present. He'll later fill in more details, but, this provides readers with a quick framework. The main point of this section--and it's a good one--is to examine the charismatic movement in light of Jonathan Edward's famous "distinguishing marks" test. This test seeks to determine true works of the Spirit from false ones.


We might frame these tests from 1 John 4:2-8 in the form of five questions
1)Does the work exalt the true Christ?
2)Does it oppose worldliness?
3)Does it point people to the Scriptures?
4) Does it elevate the truth?
5)Does it produce love for God and others?

MacArthur then examines (or judges or critiques) the charismatic movement using these five questions. Obviously, MacArthur's conclusion is that there are indicators that something is seriously wrong with the charismatic movement. For example, a movement known for its "health and wealth" or the "prosperity gospel" a movement that promotes the idea that the gospel is all about blessing you in the here and now with STUFF fails question #2.

In the second section of Strange Fire, MacArthur focuses on spiritual gifts, or, as he calls them counterfeit (spiritual) gifts. These chapters are, "Apostles Among Us?" "The Folly of Fallible Prophets," "Twisting Tongues," and "Fake Healings and False Hopes." This section is very detailed and a bit creepy.


It is a sad twist of irony that those who claim to be most focused on the Holy Spirit are in actuality the ones doing the most to abuse, grieve, insult, misrepresent, quench, and dishonor Him. How do they do it? By attributing to Him words He did not say, deeds He did not do, phenomena He did not produce, and experiences that have nothing to do with Him. They boldly plaster His name on that which is not His work. (xiii)

In recent history, no other movement has done more to damage the cause of the gospel, to distort the truth, and to smother the articulation of sound doctrine. (xv)

Nearly half of American Christians, in any denomination, and roughly two-thirds of American Pentecostals now embrace the basic premise of the prosperity gospel: God wants you to be happy, healthy, and rich. (15)