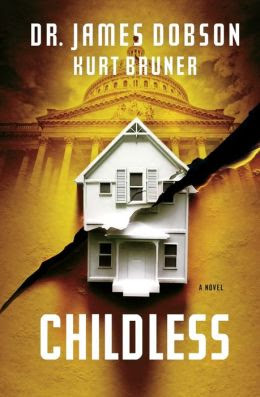 While some books are character-driven and others are plot-driven, Childless is idea-driven. Characters represent ideas and world views. Childless is all about logically following those ideas and imagining the consequences to both society and individuals. The ideas are definitely centered in the real world, the novel, is set roughly forty or fifty years in the future to give all the ideas time to come to fruition.

But that isn't all. The series is also about the treatment of the elderly.  What happens to a society, a civilization, when there are more old people than young people? Who gets what? How are resources shared and divided? In this fictional series, the author imagines that the elderly are manipulated and urged to make the best decision for everyone: to end their lives so that their grown children and grandchildren can benefit financially. Be a blessing for your loved ones: die today! Don't weigh down your loved ones lives with your continued existence! Make one last contribution to society! Be patriotic! Do good for your country, do good for your family! It is very political. Many politicians have strong opinions. The economy, the budget, is dependent, very dependent, on continuing this business.

Childless is the sequel to Fatherless. I think it is definitely important to read the books in order. There is an ongoing legal case in Childless. No one knows exactly what the three judges will decide or state in their ruling. It is supposed that Judge Victor Santiago will be the deciding judge in the case. Much of this one focuses on threatening letters he receives in the weeks leading up to the decision. A private investigator is hired by the Judge's secretary. Tyler coincidentally crosses circles with previous characters introduced in Fatherless, mainly Julia and Troy.

The main characters of Childless include Julia and Troy, Kevin and Angie, Tyler and Renee. Matthew also continues to be a narrator. It would be hard to put into words exactly how I feel about Matthew. In the first novel, I found his narration to be heartbreaking. I found I could pity him even if I couldn't like him. I'm not strong enough to pity him in the second novel. I thought Matthew's actions in the first novel were despicable, but, the comparison between his actions in the first novel and the second novel would be like comparing littering to assault.

I can't say that I enjoyed Childless. But I can say that I reacted to it. I always emotionally reacted to the characters: what they were saying and doing.