My Year With Spurgeon #22 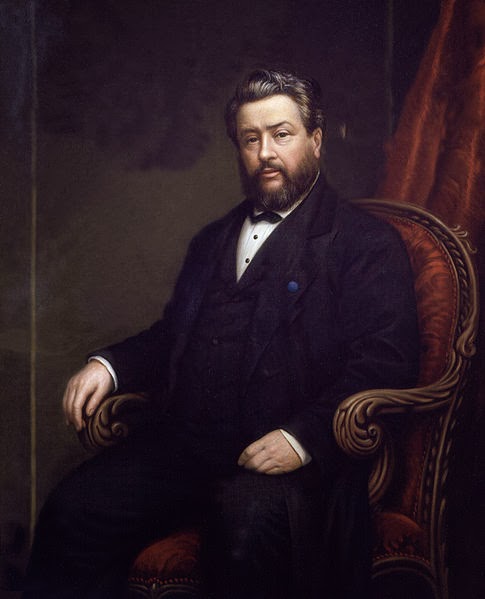 The Agony in Gethsemane
Charles Spurgeon
1874
"And being in an agony He prayed more earnestly: and His sweat was, as it were, great drops of blood falling down to the ground." Luke 22:44.

What is it then, do you think, that so peculiarly marks Gethsemane and the griefs thereof? We believe that, then, the Father put Him to grief for us. It was then that our Lord had to take a certain cup from the Father's hand. Not from the Jews, not from the traitor, Judas. Not from the sleeping disciples, nor from the devil came the trial, then—it was a cup filled by One whom He knew to be His Father, but Who, nevertheless, He understood to have appointed Him a very bitter potion, a cup not to be drunk by His body and to spend its gall upon His flesh, but a cup which specially amazed His soul and troubled His inmost heart.
He shrunk from it and, therefore, you can be sure that it was a draught more dreadful than physical pain, since from that He did not shrink. It was a potion more dreadful than reproach—from that He had not turned aside. It was more dreadful than Satanic temptation—that He had overcome! It was a something inconceivably terrible and amazingly full of dread—which came from the Father's hand. This removes all doubt as to what it was, for we read, "It pleased the Lord to bruise Him, He has put Him to grief: when You shall make His soul an offering for sin." "The Lord has made to meet on Him the iniquity of us all." He has made Him to be sin for us though He knew no sin.
This, then, is that which caused the Savior such extraordinary depression. He was now about to "taste death for every man." He was about to bear the curse which was due to sinners because He stood in the sinner's place and must suffer in the sinner's stead. Here is the secret of those agonies which it is not possible for me to set forth before you! It is so true that—
"'Tis to God, and God alone, That His griefs are fully known."
Yet would I exhort you to consider these griefs, that you may love the Sufferer. He now realized, perhaps for the first time, that He was to be a Sin-Bearer. As God He was perfectly holy and incapable of sin. And as Man He was without original taint—He was spotlessly pure—yet He had to bear sin, to be led forth as the Scapegoat bearing the iniquity of Israel upon His head. He had to be taken and made a Sin Offering—and as a loathsome thing, (for nothing was more loathsome than the sin offering)—to be taken outside the camp and utterly consumed with the fire of Divine wrath!
Do you wonder that His infinite purity started back from that? Would He have been what He was if it had not been a very solemn thing for Him to stand before God in the position of a sinner? Yes, and as Luther would have said it, to be looked upon by God as if He were all the sinners in the world, and as if He had committed all the sin that ever had been committed by His people—for it was all laid on Him and on Him must the vengeance due for it all be poured. He must be the center of all the vengeance and bear away upon Himself what ought to have fallen upon the guilty sons of men. To stand in such a position, when once it was realized, must have been very terrible to the Redeemer's holy soul.
Then, also, the Savior's mind was intently fixed upon the dreadful nature of sin. Sin had always been abhorrent to Him, but now His thoughts were engrossed with it. He saw its worse than deadly nature, its heinous character and horrible aim. Probably at this time, beyond any former period, He had, as Man, a view of the wide range and all-pervading evil of sin and a sense of the blackness of its darkness—and the desperateness of its guilt as being a direct attack upon the Truth of God. Yes, and upon the very being of God! He saw, in His own Person, to what lengths sinners would go. He saw how they would sell their Lord, like Judas, and seek to destroy Him as did the Jews. The cruel and ungenerous treatment He had Himself received displayed man's hate of God, and, as He saw it, horror took hold upon Him and His soul was heavy to think that He must bear such an evil and be numbered with such transgressors—to be wounded for their transgressions and bruised for their iniquities. But not the wounding nor the bruising distressed Him so much as the sin itself. That utterly overwhelmed His soul.
Then, too, no doubt, the penalty of sin began to be realized by Him in the Garden—first the sin which had put Him in the position of a suffering Substitute. Then the penalty which must be borne because He was in that position. I dread, to the last degree, that kind of theology which is so common, nowadays, which seeks to depreciate and diminish our estimate of the sufferings of our Lord Jesus Christ. Brothers and Sisters, that was no trifling suffering which made recompense to the Justice of God for the sins of men! I am never afraid of exaggeration when I speak of what my Lord endured. All Hell was distilled into that cup of which our God and Savior, Jesus Christ, was made to drink!

I shall conclude by drawing two or three inferences from the whole subject. May the Holy Spirit instruct us.
The first is this—Learn, dear Brothers and Sisters, the real Humanity of our Lord Jesus Christ. Do not think of Him merely as God, though He is assuredly Divine, but feel Him to be near of kin to you, bone of your bone, flesh of your flesh. How thoroughly can He sympathize with you! He has been burdened with all your burdens and grieved with all your griefs. Are the waters very deep through which you are passing? They are not deep compared with the torrents with which He was buffeted! Never a pang penetrates your spirit to which your Covenant Head was a stranger. Jesus can sympathize with you in all your sorrows, for He has suffered far more than you have ever suffered! He is able, therefore, to succor you in your temptations. Lay hold on Jesus as your familiar Friend, your Brother born for adversity, and you will have obtained a consolation which will bear you through the uttermost deeps.
Next, see here the intolerable evil of sin. You are a sinner, which Jesus never was—yet even to stand in the sinner's place was so dreadful to Him that He was sorrowful even unto death, What will sin one day be to you if you should be found guilty at the last? Oh, could we understand the horror of sin, there is not one among us that would be satisfied to remain in sin for a single moment! I believe there would go up from this House of Prayer this morning a weeping and a wailing such as might be heard in the very streets, if men and women here who are living in sin could really know what sin is, and what the wrath of God is that rests upon them—and what the judgments of God will be that will shortly surround them and destroy them!
Oh Soul, sin must be an awful thing if it so crushed our Lord! If the very imputation of it fetched bloody sweat from the pure and holy Savior, what must sin, itself, be? Avoid it, pass not by it, turn away from the very appearance of it, walk humbly and carefully with your God that sin may not harm you, for it is an exceeding plague, an infinite pest!
Learn next, but oh, how few minutes have I in which to speak of such a lesson, the matchless love of Jesus, that for your sakes and mine He would not merely suffer in body, but consented even to bear the horror of being accounted a sinner! Coming under the wrath of God because of our sins—though it cost Him suffering unto death and sore amazement—yet rather than that we should perish, the Lord stood as our Surety! Can we not cheerfully endure persecution for His sake? Can we not labor earnestly for Him? Are we so ungenerous that His cause shall suffer lack while we have the means of helping it? Are we so base that His work shall flag while we have strength to carry it on? I charge you by Gethsemane, my Brothers and Sisters, if you have a part and lot in the passion of your Savior, love Him much who loved you so immeasurably! Spend and be spent for Him!
Again, looking at Jesus in the Garden, we learn the excellence and completeness of the Atonement. How black I am, how filthy, how loathsome in the sight of God—I feel myself only fit to be cast into the lowest Hell and I wonder that God has not long ago cast me there! But I go into Gethsemane, I peer under those gnarled olive trees and I see my Savior! Yes, I see Him wallowing on the ground in anguish and hear such groans come from Him as never came from human lips before! I look upon the earth and see it red with His blood, while His face is smeared with gory sweat. And I say to myself, "My God, my Savior, what ails You?"
I hear Him reply, "I am suffering for your sins." And then I take comfort, for while I gladly would have spared my Lord such an anguish, now that the anguish is over I can understand how Jehovah can spare me, because He smote His Son in my place! Now I have hope of justification, for I bring before the justice of God and my own conscience the remembrance of my bleeding Savior, and I say, "Can You twice demand payment, first at the hand of Your agonizing Son and then, again, at mine? Sinner as I am, I stand before the burning Throne of the severity of God and am not afraid of it! Can You scorch me, O consuming Fire, when You have not only scorched but utterly consumed my Substitute?"
No, by faith my soul sees Justice satisfied, the Law honored, the moral government of God established and yet my once guilty soul absolved and set free! The fire of avenging Justice has spent itself and the Law has exhausted its most rigorous demands upon the Person of Him who was made a curse for us, that we might be made the righteousness of God in Him! Oh the sweetness of the comfort which flows from the atoning blood!


© Becky Laney of Operation Actually Read Bible
Posted by Becky at 9:00 AM