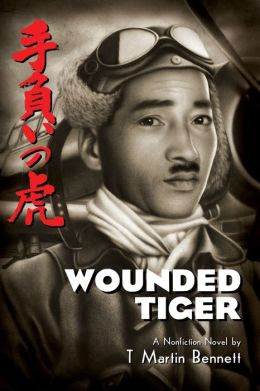 Wounded Tiger is a novel based on real people and events. In alternating chapters, readers learn the story of a Japanese pilot, Mitsuo Fuchida (THE pilot to lead the attack on Pearl Harbor); an American soldier, a Doolittle raider who becomes a prisoner of war, Jacob DeShazer; and a missionary's daughter, Peggy Covell. The story is told chronologically, for the most part, and readers see how these three very different stories come together in the end. It's a detailed book. But detailed does not mean tedious or boring. Far from it. It's a compelling look at war from multiple perspectives.

I loved this one. I did. I loved the hope of it. I was touched by Jacob's story. How he came to Christ during his time in a prisoner of war camp, and, how he took the message to "love his enemies" so literally, how he prayed for his guards, and how open his heart was to the Japanese people during the last days of the war, how he felt moved to come back to Japan after his release at the end of the war as a missionary.

But I was equally touched by other characters and stories. This one is just a great read. I definitely recommend it.