Book Review: The Story of Passover 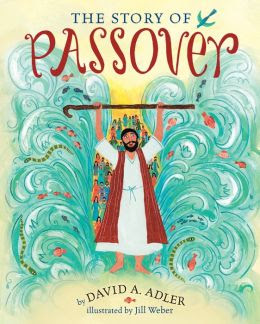 The story of Passover begins more than three thousand years ago when Jacob and his family settled in Egypt. Jacob was called Israel, and his family were called the Children of Israel. They were also called Hebrews because of the language they spoke.

An example of what has been added:


The wise men of Egypt told the pharaoh that one day a Hebrew boy would be born who would lead his people against Egypt. They couldn't tell him which boy it would be, so the pharaoh decreed that every newborn Hebrew boy must be thrown into the river and drowned.

What has been left out? Plenty. Starting with why they settled in Egypt to begin with! No mention of Joseph at all. Not that the story of Joseph is crucial for understanding Passover. I'll have to admit it probably isn't. You have to begin somewhere. Moses in the book of Exodus reminds readers why they were in Egypt and why they were enslaved:


These are the names of the sons of Israel who came to Egypt with Jacob, each with his household: Reuben, Simeon, Levi, and Judah, Issachar, Zebulun, and Benjamin, Dan and Naphtali, Gad and Asher. All the descendants of Jacob were seventy persons; Joseph was already in Egypt. Then Joseph died, and all his brothers and all that generation. But the people of Israel were fruitful and increased greatly; they multiplied and grew exceedingly strong, so that the land was filled with them. Now there arose a new king over Egypt, who did not know Joseph. And he said to his people, “Behold, the people of Israel are too many and too mighty for us. Come, let us deal shrewdly with them, lest they multiply, and, if war breaks out, they join our enemies and fight against us and escape from the land.” Therefore they set taskmasters over them to afflict them with heavy burdens. They built for Pharaoh store cities, Pithom and Raamses. But the more they were oppressed, the more they multiplied and the more they spread abroad. And the Egyptians were in dread of the people of Israel. So they ruthlessly made the people of Israel work as slaves and made their lives bitter with hard service, in mortar and brick, and in all kinds of work in the field. In all their work they ruthlessly made them work as slaves. Then the king of Egypt said to the Hebrew midwives, one of whom was named Shiphrah and the other Puah, “When you serve as midwife to the Hebrew women and see them on the birthstool, if it is a son, you shall kill him, but if it is a daughter, she shall live.” But the midwives feared God and did not do as the king of Egypt commanded them, but let the male children live. So the king of Egypt called the midwives and said to them, “Why have you done this, and let the male children live?” The midwives said to Pharaoh, “Because the Hebrew women are not like the Egyptian women, for they are vigorous and give birth before the midwife comes to them.” So God dealt well with the midwives. And the people multiplied and grew very strong. And because the midwives feared God, he gave them families. Then Pharaoh commanded all his people, “Every son that is born to the Hebrews you shall cast into the Nile, but you shall let every daughter live.” (Exodus 1) (ESV)

Some of what has been left out is quite understandable. Included are the plagues against the Egyptians, of course. Though the back and forth has been taken out--that is the back and forth between Moses and Pharaoh. His request to Pharaoh that they be allowed to leave and go worship. Pharaoh's consistent NO! Pharaoh asking Moses to pray to God for the plague-of-the-moment to cease. It's all been simplified.


Then came the tenth plague. One by one, the firstborn Egyptian sons died. The Angel of Death only visited the homes of the Egyptians. He passed over the homes of the Children of Israel. The pharaoh was frightened. He was a firstborn son. He called for Moses and Aaron. "Leave now," he told them. "Go quickly before we all die."

What I can't understand is why a book called "the story of Passover" would leave out the WHY of Passover. Why did God pass over the Children of Israel? That is a BIG why that Adler leaves unanswered. The answer to this WHY question leads to another why question, why were the Israelites to celebrate their deliverance?!


The Lord said to Moses and Aaron in the land of Egypt, “This month shall be for you the beginning of months. It shall be the first month of the year for you. Tell all the congregation of Israel that on the tenth day of this month every man shall take a lamb according to their fathers' houses, a lamb for a household. And if the household is too small for a lamb, then he and his nearest neighbor shall take according to the number of persons; according to what each can eat you shall make your count for the lamb. Your lamb shall be without blemish, a male a year old. You may take it from the sheep or from the goats, and you shall keep it until the fourteenth day of this month, when the whole assembly of the congregation of Israel shall kill their lambs at twilight.
“Then they shall take some of the blood and put it on the two doorposts and the lintel of the houses in which they eat it. They shall eat the flesh that night, roasted on the fire; with unleavened bread and bitter herbs they shall eat it. Do not eat any of it raw or boiled in water, but roasted, its head with its legs and its inner parts. And you shall let none of it remain until the morning; anything that remains until the morning you shall burn. In this manner you shall eat it: with your belt fastened, your sandals on your feet, and your staff in your hand. And you shall eat it in haste. It is the Lord's Passover. For I will pass through the land of Egypt that night, and I will strike all the firstborn in the land of Egypt, both man and beast; and on all the gods of Egypt I will execute judgments: I am the Lord. The blood shall be a sign for you, on the houses where you are. And when I see the blood, I will pass over you, and no plague will befall you to destroy you, when I strike the land of Egypt.
“This day shall be for you a memorial day, and you shall keep it as a feast to the Lord; throughout your generations, as a statute forever, you shall keep it as a feast. Seven days you shall eat unleavened bread. On the first day you shall remove leaven out of your houses, for if anyone eats what is leavened, from the first day until the seventh day, that person shall be cut off from Israel. On the first day you shall hold a holy assembly, and on the seventh day a holy assembly. No work shall be done on those days. But what everyone needs to eat, that alone may be prepared by you. And you shall observe the Feast of Unleavened Bread, for on this very day I brought your hosts out of the land of Egypt. Therefore you shall observe this day, throughout your generations, as a statute forever. In the first month, from the fourteenth day of the month at evening, you shall eat unleavened bread until the twenty-first day of the month at evening. For seven days no leaven is to be found in your houses. If anyone eats what is leavened, that person will be cut off from the congregation of Israel, whether he is a sojourner or a native of the land. You shall eat nothing leavened; in all your dwelling places you shall eat unleavened bread.”
Then Moses called all the elders of Israel and said to them, “Go and select lambs for yourselves according to your clans, and kill the Passover lamb. Take a bunch of hyssop and dip it in the blood that is in the basin, and touch the lintel and the two doorposts with the blood that is in the basin. None of you shall go out of the door of his house until the morning. For the Lord will pass through to strike the Egyptians, and when he sees the blood on the lintel and on the two doorposts, the Lord will pass over the door and will not allow the destroyer to enter your houses to strike you. You shall observe this rite as a statute for you and for your sons forever. And when you come to the land that the Lord will give you, as he has promised, you shall keep this service. And when your children say to you, ‘What do you mean by this service?’ you shall say, ‘It is the sacrifice of the Lord's Passover, for he passed over the houses of the people of Israel in Egypt, when he struck the Egyptians but spared our houses.’” And the people bowed their heads and worshiped.
Then the people of Israel went and did so; as the Lord had commanded Moses and Aaron, so they did. (Exodus 12:1-28) (ESV)

Adler's text is nicely written. I won't deny that he tells a lovely story. But is it THE story of Passover if it leaves out the why? The Israelites were passed over BECAUSE of the blood sacrifice of an unblemished lamb. This blood was applied to their lintels and doorposts. It was a sign and symbol. God was passing judgment on the Egyptians. God's wrath was on display. But because of the blood sacrifice, God passed over the Israelites. They were not included in his judgment. This was THE defining moment for a nation.

Here is how Sally Lloyd-Jones addresses the Passover in her book:


But each time Pharaoh said, "Make it stop and then I'll let them go!" And each time when God made it stop, Pharaoh changed his mind and said, "Actually, No! You can't go!" Finally, Moses warned Pharaoh, "Obey God or he will have to send the worst thing of all." Pharaoh just laughed. So God said, "The oldest boy in each family of Egypt must die. But my people will be safe." God told his people to take their best lamb, to kill it and to put some of its blood on their front doors. "When God passes over your house," Moses explained, "God will see the blood and know that the lamb died instead of you." (88)

My favorite part of The Story of Passover is actually the author's note on The Seder.