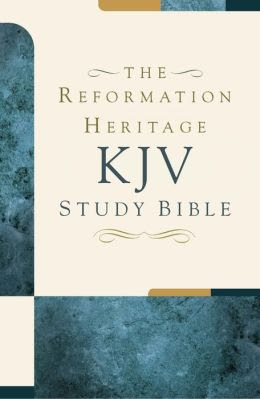 I've had the Reformation Heritage Study Bible almost two weeks. I am really enjoying this one!!! I would definitely recommend it.

Strengths:
*Here's a good idea of what the study helps section offers readers:

Just out of curiosity, when you read the study Bible, do you read all the study notes as well? I've read the whole Bible through a couple of times and I've been thinking of reading a study Bible along with all the notes. I'm not sure how helpful or edifying that would be.

So far, I am reading all the study notes. It does slow down the reading process. I read the text first, then the notes. And if it's a long chapter, I might break it up into sections. Reread a paragraph, look at the notes, reread a paragraph, look at the notes. So by the end, I might have read the text twice, and the notes once. Sometimes. It depends on how challenging it is--how complex a thought it is that I'm trying to keep in mind.

Usually, I read text-only Bibles because I like to focus on the Bible itself. But sometimes I do like to read a study Bible.