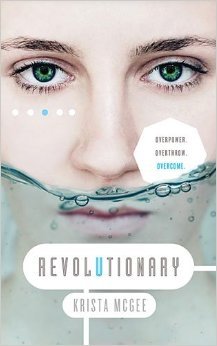 I thought I would start by sharing my thoughts on the series as a whole. I really enjoyed the series. I enjoyed the premise of it and the world-building. Dystopias seem to be ever-trendy in the field of YA fiction. But there just aren't many YA dystopias being published in the Christian market. So I was very excited to see this trilogy published by Thomas Nelson. It follows the crowd in some ways: heroine who doesn't know her own strength and/or worth, strong romantic elements including a love triangle, a corrupt government or power-system that needs to be opposed/overthrown. But it's also distinct in that it includes spiritual themes. Thalli and most of her friends come through the series to know--in part due to the strong witness and testimony of John Turner--the Designer.

What did I think of the last book in the series? Well, I enjoyed it very much! I think I enjoyed it more than the second book. That could be because it's the last in the series and it brings the series to a good, solid conclusion. (Cliff-hanger endings, while understandable, can be frustrating!) Though it had been a few months since I read the second book, I soon found myself hooked and connected right back into the story.

The third book, as you might expect, is the book where readers finally get answers and then some! The book is very intense and there really isn't a calm moment where all the characters are safe and happy and out of danger. The threat is felt on nearly every page. And just when the threat seems manageable, something happens to change all that. (I wouldn't say it is as bloody as say Hamlet or MacBeth, but, do expect loss.)

I wanted to keep reading because I had to know how it all ended.

But. I must admit that love triangles don't really thrill me. There are exceptions to the rule, I suppose, but I never "like" or "love" a book more because of the presence of a love triangle. If anything, I like or love a book in spite of the fact that it includes a pesky love triangle. The love triangle in Revolutionary seems more dramatic, more life-and-death, than in other series I've read. I thought the characterization was nicely done. I came to care for many if not all of the characters--though not the villain: boo, hiss--I just wish they'd been less romance and more friendship.

© Becky Laney of Operation Actually Read Bible
Posted by Becky at 8:59 AM