Book Review: A Most Inconvenient Marriage 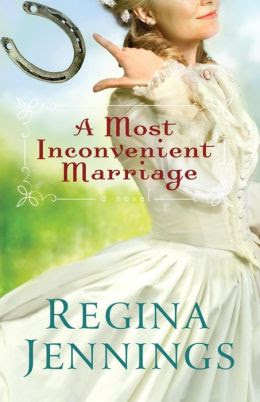 I really enjoyed reading Regina Jennings' A Most Inconvenient Marriage. This one isn't so much a marriage of convenience or inconvenience. As it is a case of mistaken identities and misunderstandings.

Abigail Stuart is the heroine of A Most Inconvenient Marriage. The novel opens in February 1865. She's a nurse at a prison camp--prisoner of war camp--in Missouri. She has been taking care of a patient, his name is Jeremiah Calhoun. The two are friendly, but, not romantic particularly. He is always talking of home, of family, of friends. When he knows that he is dying, that there is no hope for recovery, he asks her to marry him. He wants her to have his horse farm, to live with his mom and his sister. His sister is sick--weak--and she needs a nurse. He also knows that she knows horses, that her family had a horse farm of its own. She reluctantly agrees. The two marry. In March, she goes to her new home and meets the family. Obviously, there will be some surprises when she arrives.

The surprises keep coming. And Abigail herself receives the biggest surprise of all: Jeremiah Calhoun shows up very much alive months after she's all settled in. He's never seen her. She's never seen him. So obviously, the mystery patient was up to something…but what?!?! And what will everyone do now? His mom loves Abigail. His sister, well, not so much, then again, does she show her love for anyone?! Even his fiancee--former fiancee, I suppose--loves Abigail. The two have become surprisingly close. The whole community believes the two are married. She's known as Mrs. Calhoun!!! So what is he to do with this woman claiming to be his wife?

So far, I haven't mentioned anything that the publisher didn't mention on the jacket description. I want to keep it that way!

I liked this one. It's premise is a bit silly and dramatic perhaps. But it works.