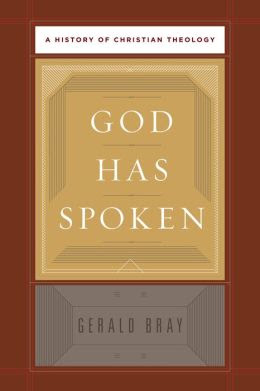 Has reading God Has Spoken cured me of my curiosity when it comes to church history? Perhaps. If I said yes, it would be in a teasing way. That being said, I think it will be the rare reader indeed that finds the whole book--every part, chapter, heading--interesting or of interest.

If I had to sum up the book in just a few words, I'd say it was about the history of arguments. That isn't exactly fair, mind you. But that's keeping it short. Is arguments the absolute best word? Maybe, maybe not. Debates. Discussions. Either one could work in certain places. But arguments genuinely is the best word in some cases.

This one is "a history of Christian theology." The first priority of the book is not in communicating sound doctrine clearly and concisely. I would be hesitant to say that was a priority at all. You could easily walk away from the book more confused than when you started. That is if you're looking for this book to tell you what is sound and good and right to believe. It isn't so much a matter of right and wrong, good and bad, sound and heretical. It isn't so much categorizing men as belonging or not belonging to a group of sound and biblical theologians. (If you're looking for simple and clear recommendations like "read these theologians" and "avoid these theologians" for your private study and personal growth, you won't find it here.)

No, the priority of this one, the whole point of it really is to trace "Christian theology" from the first century to the past decade. You could say it opens with "where did we start?" and concludes with "where might we be heading?"

World views. Philosophies and philosophers. For Christians with a genuine interest in philosophy--all philosophy, not just so-called Christian philosophy--this book is probably written with you in mind. It is very much a history of philosophy. Men making much of their grand and sometimes not so grand thoughts of God. Thoughts that may be drawn from Scripture, but, just as easily drawn from their own imaginations. Or from other schools of thought--other sources, other influences.

It is thorough. It is packed with information. Plenty of names. Plenty of dates. Plenty of places. Plenty of ideas. Plenty of councils, creeds, catechisms, and confessions. Plenty of footnotes. Most chapters have hundreds--yes, hundreds--of footnotes. To keep it relatively simple, it traces the development of three groups: Roman Catholics, Eastern Orthodox, and Protestants. (It traces several Protestant denominations as well.)  It traces threats, dangers, weaknesses. It focuses on essentials and nonessentials. Expect plenty of detailed discussion on the Lord's Supper and baptism. Also election.

One of the greatest strengths of the book, perhaps, is its organization.

Part One: The Israelite Legacy
1 Christianity and Judaism


Part Two: The Person of the Father
3 God as Father


Part Three: The Work of the Father
5. The Reconciliation of the World


7. The Work of the Father and the Trinity


Part Four: The Person of the Son
8. The Challenge of the Incarnation


Part Five: The Work of the Son
12. The Body of Christ


14. The Coming of Christ's Kingdom


18. The Inspiration of Holy Scripture

19. The Preservation of the Church


21. The Mystical Body of Christ


Part Eight: One God in Three Persons
22. The Classical Doctrine of God


23. The Eclipse of Theology


25. The Challenge of God Today


The organization alone cannot make it comprehensible and readable. But without it being so well-organized, readers wouldn't stand a chance. So in a way, the approach is topical instead of chronological. But at the same time, the chronology tends to come in waves. So that as one progresses through the book, one gets closer and closer to the present day.

Another strength of the book--intentional or not--is that it emphasizes the humanity of believers, of theologians, of scholars, of philosophers. It is too simplistic to categorize a theologian in terms of his being "good" or "bad" or "right" or "wrong" or "worth reading" or "best skipping." Yes, Bray presents readers with some theologians that clearly, obviously get it wrong. But even in his presentation of the ones who "got it right," one gets the idea that they were fallible, capable of big and small mistakes in their thinking. That they got a couple of points or positions right, but, they got a couple of points or positions wrong. That just because they get one or two things right, doesn't mean that believers should accept every single thing they wrote as true and right and good.

This isn't a book that you should read if you're looking for what to believe about God, Jesus, and the Holy Spirit. It is instead what men have believed--for better or worse--throughout twenty centuries of history. What men have argued about and in some cases fought for.

It isn't a book that says, "The Bible says this, this, this, and that is true. Believe it. Live it. Trust it. Proclaim it." In all the discussion of doctrine, at least in most of the discussion to my recollection, it is never the Bible says this or that. It is instead, this person taught this, this person wrote that. It is not arguing for certain doctrines with a foundational support or framework of the Bible itself. It is this is what men believed in this century, in that century. It is a book about what men at various times have believed of God and about God. It isn't "this is the God as revealed by the Bible" instead it is "this is what men have said about God."


Until the nineteenth century, there was no such thing as the “history of Christian doctrine.” The doctrines themselves were contained in the creeds and confessions of the church, but how they had come into being was seldom examined in any detail.

Theological developments did not occur arbitrarily but appeared in a logical sequence over time. The resolution of one problem led naturally to the next one, a process that we can observe from the beginning of the church up to the present time. Whether we have now arrived at the “end” of Christian theological development is impossible to say. Our perspective can only be governed by where we are, because each generation has a complete theology of its own. Future ages may well have to recast the tradition in order to explain developments that are as yet hidden from our eyes, but this we cannot tell. It may also be that we have reached the end of the present age and that Christ will come again before that can happen. This we do not know either. All we can do now is look at where we have come from, try to understand where we are, and suggest where we might go from here.

© Becky Laney of Operation Actually Read Bible
Posted by Becky at 8:03 AM