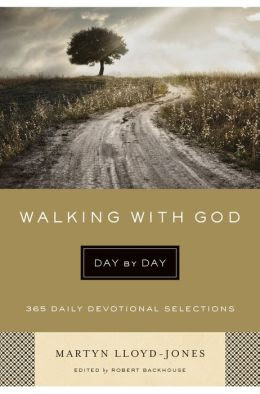 One of the devotionals I am using this year is Walking with God Day by Day by Martyn Lloyd-Jones. I thought I would share some of my favorite passages month by month. (January, February, March, April, May, June, July, August, September, October, November).
From December 1


The New Testament at once shows us the total inadequacy of the common, current version of what constitutes a Christian. The New Testament terms are regeneration, a new creation, being born again. What makes men and women Christians is something that is done to them by God, not something they do themselves: “Whosoever believeth that Jesus is the Christ is born of God.” And then, “Every one that loveth him that begat ...” God, according to John, is the one who begets us; it is God’s action, not ours. Now we need to take time in emphasizing the obvious contrast in each of these subdivisions. How ready we are to think of being a Christian as the result of something we do! I live a good iife—therefore I am a Christian; I go to a place of worship—therefore I am a Christian; I do not do certain things—therefore I am a Christian; I believe—therefore I am a Christian. The whole emphasis is upon myself, upon what I do. Whereas here, at the very beginning of the New Testament definition of a Christian, the entire emphasis is not upon man and his activity, but upon God. He who begat, He who produced, He who generates, He who gives life and being. Thus we see we cannot be a Christian at all unless God has done something to us. But I go beyond that and say that what makes us a Christian is something that makes us like God. “Whosoever believeth that Jesus is the Christ is born of God.” That “of” is an important word; it means “out of God”; this is one who has received something of God Himself.


Faith enables us to have victory over the world and to overcome it directly—passively—by the resting of a naked faith upon the Lord Jesus Christ. I am increasingly convinced that this is the greatest lesson that we as Christian people can ever learn in this world. It is the possibility of directly and immediately and passively resting upon the power and the ability of our risen Lord. “This is the victory that overcometh the world, even our faith” (verse 4)—my faith in Him, my belief in Him, that He is the Son of God. The result of that is that I go to Him and rest upon Him.


As I look at the Lord Jesus Christ in terms of this fight against the world, I ask this question: Why did He ever come into this world? You see, I am now working out my faith in Christ. I believe that the person, Jesus of Nazareth, about whom I read in the Gospels, is the Son of God. Very well, I ask immediately, why did the Son of God ever take upon Himself the likeness of sinful flesh and live as man, as He indeed did? What is the meaning of it all? And there is only one answer to that question. It was because of the power of sin, the power of Satan, the power of evil. There is no other explanation. The Son of God came because He was the only way in which we could be delivered from the world. In other words, it is the doctrine of sin again, the power of Satan and sin and evil. He came into this world because the world was dominated by sin, and it is only as I believe that “Jesus is the Son of God” that I begin to understand the nature of the fight in which I am engaged. People are optimistic about this world, and they are so because they have never understood the nature of sin. But if you believe that Jesus is the Son of God, you have to believe that the power of sin and evil and Satan is so tremendous that man had failed and the Son of God had to come. Do you seen, then, how this enables us to overcome the world? How can I overcome the world unless I have seen the nature of the problem? The moment I have faith in Christ, I begin to understand the problem, for it is only the Christian who can see through this world. Everybody else is dominated by the world—governed by it. But the moment I become a Christian I see through the world.

Becky, not a comment on this post per se, but a thank you for pointing me in the direction of so many fine authors. I have progressed from reading the posts to reading the posts plus devotionals; now I am reading the posts and books (collected works of Tozer at the moment). I enjoy the fiction reviews also. Blessings to you in 2015!