Book Review: Final Word: Why We Need the Bible 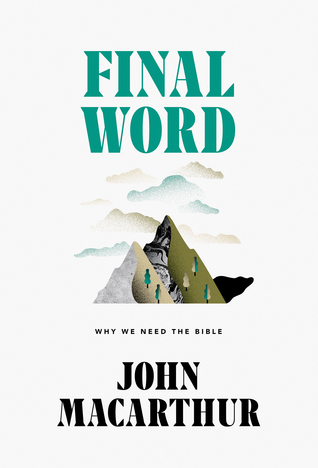 First sentence: Elizabeth Charles, the hymn writer who gave us “Praise Ye the Triune God,” was also a novelist.

In Final Word, MacArthur argues that even within the church the Bible is under attack. Many people--people who call themselves believers, people who attend church--are unable to put up a defense of the Bible, unable to articulate why the Bible is (still) important and (still) relevant. Believers of all ages and stages need a refresher course on the place the Word should have in their lives.

MacArthur reminds readers that the Bible has been under attack since Eve spoke with the serpent in Genesis. Satan's tactics have not changed. We are still vulnerable to his tactics, his attacks. Sadly, most believers deny there is even a battle to be fought. Spiritual warfare is not something most prepare for. We tend to be especially weak when unprepared.


"The battle for the truth is the battle for the Bible, and in this fight God’s people cannot flinch. Biblical truth is under relentless and endless assault. And like Luther and the heroes of the early Reformation, we must meet the enemy head-on and be willing to stand and fight for the truth, especially when others avoid or even abandon truth when it becomes controversial."

Final Word is a short read; it has just SIX chapters. It may be short but it is super-satisfying. MacArthur is clear and straight-forward in this one. He defines terms that readers may be unfamiliar with. Every chapter relies on Scripture. Many chapters focus in on one or two specific passages of Scripture. MacArthur is an expositor even when he's writing. He will share Hebrew and/or Greek words and clarify the meaning of the text. He stays on task too.


It is the truth which is assailed in any age which tests our fidelity. It is to confess we are called, not merely to profess. If I profess, with the loudest voice and the clearest exposition, every portion of the truth of God except precisely that little point which the world and the devil are at that moment attacking, I am not confessing Christ, however boldly I may be professing Christianity. Where the battle rages the loyalty of the soldier is proved; and to be steady on all the battle-field besides is mere flight and disgrace to him if he flinches at that one point. ~ Elizabeth Charles

Every attack on the Bible is an attack on divine truth and God’s holy nature, no matter where the attack originates. ~ John MacArthur

There is a severe lack of noble Bereans, who faithfully tested everything they heard against the standard of Scripture (Acts 17:10–11). Today, countless men and women claim to hear fresh words from God—words that often contradict what His Word actually says, and despite the obvious fact that God wouldn’t be talking to those with bad theology and questionable behavior. ~ John MacArthur

Hermeneutic of humility is the notion that believers shouldn’t hold too tightly or dogmatically to an interpretation of God’s Word, especially not to the exclusion of other views and perspectives. ~ John MacArthur

The message of the church cannot be dictated by the whims and values of the culture. Sinners can’t be coddled into the kingdom. Rebellious unbelief demands confrontation at the point of unbelief. We must not skirt the offense of God’s Word if we mean to lead people to faith and repentance—it is exactly at the point where the gospel offends that sinners need to be confronted. ~ John MacArthur

True saving faith is impossible if sinners don’t yield to the guilt of their sin and submit to the authority of God’s Word concerning their condemnation and salvation. We need to be humble, tender, and loving in our evangelism. But we must not be confused into thinking that the goal is anything other than to smash deceptions and torch misunderstandings that nurture unbelief. ~ John MacArthur

A flippant approach to Scripture is just as dangerous as unabashed unbelief. ~ John MacArthur

True biblical Christianity requires a denial of every worldly value and behavior, and Christians must be willing to make a commitment to the Word of God, with a full understanding of the implications of doing so. Jesus plainly tells the disciples in John 15:19 that the world will hate them because they are not of this world. God has chosen believers out of the world, and the world hates them. ~ John MacArthur

Contempt for Scripture is not intellectual; it’s moral. As the Lord explained to Nicodemus, “Men loved the darkness rather than the Light, for their deeds were evil” (John 3:19). ~ John MacArthur

Christians must embrace and exalt six truths about the Scripture: its objectivity, rationality, veracity, authority, incompatibility, and integrity. ~ John MacArthur

People may believe or disbelieve the Bible, but no one has the power or the prerogative to establish truth or to change it. It is fixed, once for all—the Word of God is settled forever in heaven. This is profoundly essential. God wrote a Book—just one Book—and He was able to say everything He wanted to say. He said it without error, without flaw, and without anything omitted or unnecessarily included. It is the truth, the whole truth, and nothing but the truth. And God gave His Book to man through the means of inspiration, by which the Spirit of God moved in human writers who wrote down the very words that God wanted them to write. Man may discover, learn, understand, and apply it, but man has nothing to do with its origination. No human being has ever had in himself any idea, thought, or experience that determined any divine truth—it all comes from God. No human or angel has ever been, or will ever be, a source for establishing divine truth. It is God’s Word alone. ~ John MacArthur

Truth cannot be subjective; there is no such thing as your truth or my truth. Truth is forever fixed. Authentic Christianity has always held that Scripture is absolute, objective truth. The Bible is God’s truth regardless of whether a person believes, understands, or likes it. It is permanent and universal truth, and therefore, is the same for everyone. ~ John MacArthur

If we want to know Him and understand what He has revealed in His Word, we must approach Scripture rationally, following the normal processes of logic and reason with sound hermeneutics to come to a true understanding of its meaning. ~ John MacArthur

The truth can be known only if the correct meaning of the text is known. Today, the church is overrun with false shepherds peddling faulty interpretations of Scripture that are not God’s Word. ~ John MacArthur

The purpose of God’s Word is to deposit life-transforming truth into the mind. We cannot know the truth of a passage until we understand the accurate interpretation of the passage. We need to be careful and thorough students of all Scripture, confident in its divine authorship and dependent on the Holy Spirit’s illuminating work in bringing us to a clear understanding of God’s revealed truth. ~ John MacArthur

The baffling reality is that churches today are filled with people who want to look anywhere but Scripture to find God. They want to identify Him allegorically in movies, on TV, and throughout pop culture, as if those instances can prick the conscience of the unsaved world in ways Scripture cannot. They think it sounds spiritual to ask, “What would Jesus do?” But they never open their Bibles to study who He is or what He did. ~ John MacArthur

Others reject the hard truths of the gospel that offend worldly sensibilities, preferring to twist Scripture into the therapeutic language of our culture. Some simply ignore portions of the Bible altogether, writing them off as outdated and irrelevant to modern readers. God’s people must not be so careless or capricious with His Word. ~ John MacArthur

Believers need to embrace and exalt the integrity of Scripture. God did not intend for His Word to be subdivided, excerpted, and wrenched out of context.  ~ John MacArthur

The Bible is regularly treated superficially and routinely taken out of context, resulting in a generation that has no expectation that the preacher would handle the Word of God accurately. Rather, people are trained to treat the Bible like a book that they are free to manipulate for their own ends, which ultimately both exposes and perpetuates their low view of Scripture. ~ John MacArthur

The Bible is frequently brutalized as people ride over the top of it and pluck off what they want. ~ John MacArthur

The only One who has the right to speak to His people with authority is God. The Father called sinners out of the darkness of sin and fitted them for the work of His kingdom. Christ purchased the church with His own blood. He is the head of the church, and the head of the church mediates His authority through His Word. And through the Word, the Holy Spirit does His work of sanctification in every believer’s life. The Trinity speaks to the church, accomplishing the work of redemption through the Scripture. ~ John MacArthur

God’s Word is the priority in spiritual growth. It’s the Holy Spirit’s tool and the believer’s food; therefore, it’s the means of sanctification. All the other means of grace flow to us out of Scripture. ~ John MacArthur

The more that God’s truth is removed from our lives, the more inhibited our spiritual progress becomes. Nothing else can do the work that the truth does. There is no sanctifying power in human wisdom, intuition, insight, or experience. It is only in the Word of God. ~ John MacArthur

We must soak our minds in the Scriptures, fueling the Spirit’s sanctifying work. ~ John MacArthur

Our lives are controlled by our convictions. As the truth of God’s Word begins to occupy our minds and shape our thoughts, it will produce principles that we desire not to violate. This is what sanctification is about—being inwardly compelled to obedience. ~ John MacArthur

Much of the chaos and confusion in the church today is the direct result of pastors’ failing to carefully discharge their duty to teach sound doctrine and train people to be discerning, so as to guard the church from error. ~ John MacArthur

Most people treat the Bible very politely. They have a small pocket volume, neatly bound; they put a white pocket-handkerchief around it, and carry it to their places of worship; when they get home, they lay it up in a drawer till next Sunday morning; then it comes out again for a little bit of a treat and goes to chapel; that is all the poor Bible gets in the way of an airing. That is your style of entertaining this heavenly messenger. There is dust enough on some of your Bibles to write “damnation” with your fingers. ~ Charles Spurgeon

The deeper our understanding of Scripture goes, the more deeply we get to know God in the fullness of His revelation to us. Think of it this way: if you’re not growing in your love for God, there is good reason to believe that you are treating Scripture superficially. ~ John MacArthur


© Becky Laney of Operation Actually Read Bible
Posted by Becky at 9:05 AM