Book Review: Cries from the Cross 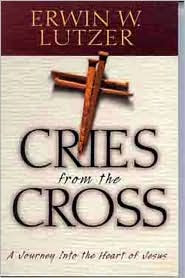 Cries from the Cross is a wonderful book--whether you are reading it for the first time or treating yourself to a reread. In this one, Lutzer is examining Jesus' words spoken from the cross. There is a chapter for each of Jesus' seven statements or 'cries.' There's also a preface, introduction, and epilogue that help set the book into context.

Do you know what Jesus' seven cries from the cross were? Have you considered how they can speak into your life--how they relate to you personally? If you haven't--or even if you have--it's worth pondering (again). I know that 'pondering' or 'meditating' or 'reflecting' takes time and that the average person prioritizes just about everything else over silence or quiet--but at what costs to our souls?

Here they are in the order in which he writes about them:

Lutzer clearly and passionately shares the gospel message--that old, old story--that gospel message that when empowered by the Spirit--through the Spirit--can transform lives and take people out of darkness and into the light.

To stand at the foot fo the cross is to witness the purpose for which God created the world. Here we see the attributes of God on display; and if we look carefully, we will see ourselves, with all of our needs, sins, and self-deceptions. Thankfully, it is at the cross that God chose to remove His wrath from those who would humbly trust Christ as their sin-bearer. (11)

The cross properly understood exalts no one whom it first does not humble; it gives life only to those whom it first "puts to death." The cross exposes the futility of our self-righteousness; it reminds us that we are sinners, incapable of bringing about our own reconciliation with God. Before the cross we can only stand with bowed heads and a broken spirit. (16)

Unless we see ourselves as deserving of the verdict that Pilate gave to Jesus, unless we see ourselves as worthy of hell, we will never understand the Cross. Someone has said that it is difficult for us to embrace the cross in a day when personal enjoyment is king. Contrary to popular belief, the central message of Christianity is not the Sermon on the Mount or Jesus' parables about love toward one's neighbor. The message that changed the first-century world was that human beings are guilty, helplessly guilty of sins for which they cannot atone. The cross shatters all pride and undercuts the ultimate value of self-effort. The cross stands as proof of God's great love but also reveals our own ugliness. (17)

The church can only live and breathe at the cross; without it, there is no life and no reason to exist. Properly proclaimed, it is "the power of God unto salvation." (19)

Jesus' suffering was terrible for the simple reason that our sin is terrible. (20)

No one can experience the eternal favor of God if they bypass the cross. (25)

Forgiveness sounds like a marvelous idea until you are the one who has to do it. (33)

Words of forgiveness came from His lips when the nails were being driven into His body, when the pain was fiercest, when the jolts of anguish were the sharpest; He prayed as the cross was lowered into the hole with a thud. It was then, when His nerves were yet the most tender, when the pain was the most unfathomable, He who was the victim of history's greatest crime prayed for the criminals. He could forgive because He was about His Father's business. (36-7)

God never lowers His standard of justice to the level of our ignorance. Sins committed in ignorance are still sins. The guilt of those who crucified Jesus was real and objective regardless of how much they understood or did not understand. (41)

Are some sins "unpardonable"? The answer is no, for if the murder of the Son of God was "forgivable" for those who sought forgiveness, then all sins can be forgiven. (46)

He who needed no forgiveness died for those of us who are condemned without it. (47)

Although God forgives us because of Christ, it is neither His job nor His obligation to do so. He forgives us because of undeserved mercy toward us whose just punishment is hell. The cross is the bridge of redeeming love; on it, we walk across the chasm to God, who graciously provided forgiveness for those who believe. If we do not understand this, we do not understand the gospel. (47)

At His birth He was surrounded by beasts, and, now in His death, with criminals. Let no one say God has stayed aloof from the brokenness of our fallen world. He descended that we might ascend with Him to newness of life. (54)

Helplessness is not a curse if it draws us to the only One who can help us. Indeed, if we are not helpless, we cannot be saved. (56)

Warren Wiersbe points out that this man was not saved at his last opportunity, but at his first opportunity. (68)

The thief's forgiveness reminds us that there is more grace in God's heart than sin in our past. (69)

If we had been there, how close would we have stood to the cross? Nearby or at a comfortable distance? Would we have been intimidated by the mob, or would we have gladly let the angry rabble-rousers know that we were followers of the Man hanging on the middle cross? Would we stand nearby even if the cross cost us as much as it cost Christ? (82)

Christ did not die to make the Father loving, for He loved us from the foundation of the world. (89)

The first purpose of the cross was not for us, but for God. Yes, Jesus shed His blood for us, but it is even more true to say that He shed His blood for the Father. When the blood was sprinkled on the doorposts of the houses in Egypt, it was put there for the benefit of the families, but it was also put there for God. Jehovah said, "When I see the blood, I will pass over you" (Exodus 12:13). (100)

Either Jesus bears our sin, or we do. If the Father turned His face away from His beloved Son when He was regarded as a sinner, we can be sure that the Father will turn away from every sinner who stands before the Judgement Bar on his own merits. We are either saved by His rejection, or we must bear our own rejection for all of eternity. If those who are in hell should cry, "Why have You forsaken me?" heaven shall remain silent, for they receive the just recompense for their deeds. (103-4)

As Matthew Henry put it, "The torments of hell are represented by a violent thirst, in the complaint of the rich man who begged for a drop of water to cool his tongue. To that everlasting thirst we had all been condemned, if Christ had not suffered on the cross." Hell is heightened desires with decreased satisfaction. Hell is the inflamed desires of the body, with no possibility of a drink. Hell is remembering the Living Water we could have enjoyed on earth that would have taken us to heaven. Hell is a lake of fire, a place of endless, unquenchable thirst. Thankfully, Jesus suffered parched lips that we might be able to drink from the wells of salvation. He endured the thirst of hell, so that its fires might be quenched for us. Of those in heaven we read, "Never again will they hunger; never again will they thirst. The sun will not beat upon them, nor any scorching heat. For the Lamb at the center of the throne will be their Shepherd; he will lead them to springs of living water. And God will wipe away every tear from their eyes" (Revelation 7:16-17). (115)


© Becky Laney of Operation Actually Read Bible
Posted by Becky at 8:33 AM