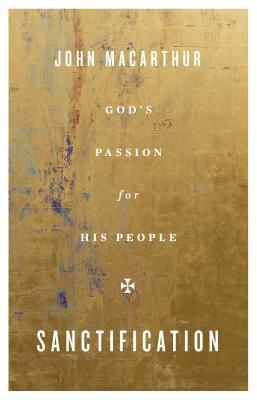 First sentence: We have a clear window into Christ’s continual intercession for his people in John 17. That passage is known as Jesus’s High Priestly Prayer. Its centerpiece is a plea for the sanctification of his disciples: “Sanctify them in the truth; your word is truth. As you sent me into the world, so I have sent them into the world. And for their sake I consecrate myself, that they also may be sanctified in truth” (John 17:17–19). Then Jesus pointedly applies that request not only to the Twelve, but also to every Christian in all subsequent generations: “I do not ask for these only, but also for those who will believe in me through their word” (17:20).

There is nothing quite so satisfying as a concise yet delicious dose of truth to nourish the soul. John MacArthur's Sanctification is a delightful length on a topic that doesn't get as much attention as it deserves. For the record, I LOVE, LOVE, LOVE the doctrine of justification. But I also love, love, love the doctrine of sanctification. The fact that many believers are not familiar with these essential truths is sad.

I am not speaking of familiarity with the exact terms "justification" or "sanctification" but the concepts and truths of these doctrines. Perhaps this is because often there isn't a thorough understanding of sin, original sin, the fall of man. If one doesn't have a proper understanding of sin--what it is, how it separates us from God, how deadly dangerous it is, etc.--then there's a SO WHAT or WHO CARES when it comes to later doctrines like justification and sanctification.

The book is timely and relevant--as truth always is. The focus is more on WHY you should care about sanctification.

Namely, this book is urging--begging--preachers to ACTUALLY CARE. He believes--rightly, in my opinion, that pastors should CARE if their flocks grows in the faith, if they bear fruit, if they are living holy lives and FOLLOWING Jesus. Pastors should not care exclusively about attendance or about feedback and approval. They should not be talking to hear themselves talk...but instead be teaching and preaching with the sanctification of their hearers--their flock--in mind.

MacArthur writes, "Despite the diversity of so many responsibilities, all those pastoral duties ultimately point to one clear and singular goal: the sanctification of God’s people. All the man’s energies and all the faculties of his heart and mind must remain focused on that one long-range goal, and he must never lose sight of it. This is, after all, God’s ultimate purpose for his elect: “For those whom he foreknew he also predestined to be conformed to the image of his Son” (Rom. 8:29). That is how Scripture summarizes the goal of sanctification—not merely to make us appear holy, but to make us truly and thoroughly Christlike."

He addresses misconceptions on holiness and some of the faults of the modern church. Two of the misconceptions are legalism and antinomianism. Chances are you've heard those terms but perhaps struggle to distinguish between these two. MacArthur is great at explaining the differences and pointing out why both are wrong. He writes, "The legalist thinks he’s spiritual because he observes a law; the antinomian thinks he’s spiritual because he doesn’t. Both define the Christian life by what they do with regard to the law rather than stressing the need for the Spirit’s empowerment to conform us to Christ’s likeness. The legalist will never be able to restrain the flesh with his legalism (Gal. 5:17). And the antinomian who refuses even to hear the law because he thinks rules of any kind are a threat to his “liberty” is still in bondage to sin (Rom. 6:15–16)."