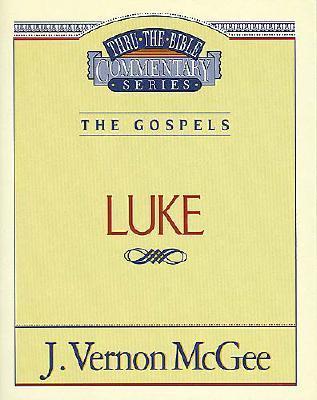 I am reading the Bible in 2020 using the daily M'Cheyne (Robert Murray M'Cheyne) plan. I thought it would add a layer of substance to in addition to the four chapters a day, to also read commentaries for those chapters. For that I am using Matthew Henry's Commentary on the Whole Bible. But the plan goes through the New Testament (and Psalms, I believe) twice. So now that I've finished Henry's commentary for the New Testament, I am tackling the New Testament commentary section of J. Vernon McGee's series.
This is not my first time reading J. Vernon McGee. I've read twelve or so of his commentaries. (Most recently his volume on Mark.)

Overall, I like his laidback, casual, straightforward, tell it like it is approach to teaching Scripture. There is something so grounded and down to earth about him. Each reader is "his" friend. It's hard not to feel like he is a friend too.

One of the things that I love about McGee's commentaries is that he just speaks timeless truths.

By this point, McGee has covered Matthew, Mark, and now Luke. You would think that it would be a lot of repetition and less insight. I didn't find that to be the case.

In the introduction, he points out some reasons why Luke is unique.

Note these special features of Luke’s gospel: 1. Although the Gospel of Luke is one of the synoptic gospels, it contains many features omitted by Matthew and Mark. Dr. Luke gives us the songs of Christmas. 3. Dr. Luke has the longest account of the virgin birth of Jesus of any of the Gospels. In the first two chapters, he gives us an unabashed record of obstetrics. A clear and candid statement of the Virgin Birth is given by Dr. Luke. 4. Dr. Luke gives us twenty miracles of which six are recorded in no other gospel. 5. He likewise gives us twenty-three parables, and eighteen of them are found nowhere else. The parables of the Prodigal Son and the Good Samaritan are peculiar to this third Gospel. 6. He also gives us the very human account of the walk to Emmaus of our resurrected Lord. This proves that Jesus was still human after His resurrection. Dr. Luke demonstrates that the Resurrection was not of the spirit, but of the body. Jesus was “… sown a natural body … raised a spiritual body …” (1 Cor. 15:44). 7. A definite human sympathy pervades this gospel, which reveals the truly human nature of Jesus, as well as the big-hearted sympathy of this physician of the first century who knew firsthand a great deal about the suffering of humanity. 8. Dr. Luke uses more medical terms than Hippocrates, the father of medicine.

© Becky Laney of Operation Actually Read Bible
Posted by Becky at 10:41 AM