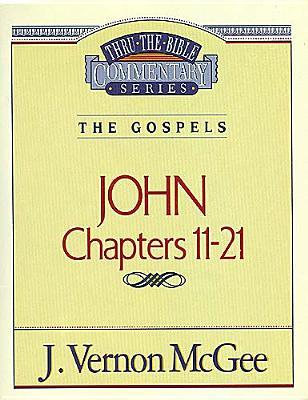 John 11-21 (Thru the Bible #39) J. Vernon McGee. 1995. 192 pages. [Source: Bought]
First sentence: It is generally assumed that the Gospel of John is easy to understand. Often you hear the cliche, “The Gospel of John is the simple gospel.” And the simplicity of the language has deceived a great many folk.
I am reading the Bible in 2020 using the daily M'Cheyne (Robert Murray M'Cheyne) plan. I thought it would add a layer of substance to in addition to the four chapters a day, to also read commentaries for those chapters. For that I am using Matthew Henry's Commentary on the Whole Bible. But the plan goes through the New Testament (and Psalms, I believe) twice. So now that I've finished Henry's commentary for the New Testament, I am tackling the New Testament commentary section of J. Vernon McGee's series.

This is not my first time reading J. Vernon McGee. I've read probably twenty or so of his commentaries. (Most recently his volume on 1 Corinthians.) I honestly can't recall if I've read his volume on the Gospel of John before.
Overall, I like his laidback, casual, straightforward, tell it like it is approach to teaching Scripture. There is something so grounded and down to earth about him. Each reader is "his" friend. It's hard not to feel like he is a friend too.

One of the things that I love about McGee's commentaries is that he just speaks timeless truths. He almost always leaves me thinking!!! IF I was reading this in a traditional book format, I would probably find myself underlining, putting stars, putting exclamation points, and a couple of AMENS. (With only a few question marks or zahs thrown in.)
*Note, I would have included the first sentence of *this* section of the gospel of John but I didn't highlight that. I thought the book separated at chapter 13? I don't know why.
Quotes:
© Becky Laney of Operation Actually Read Bible
Posted by Becky at 11:01 AM