76. The Trinity An Introduction 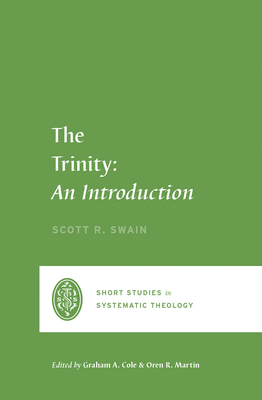 The Trinity: An Introduction. Scott R. Swain. Edited by Graham A Cole and Oren R Martin. 2020. October. 161 pages. [Source: Review copy]
The Trinity is a book that is part of a new series by Crossway. About the series, "While the specific focus will vary, each volume will (1) introduce the doctrine, (2) set it in context, (3) develop it from Scripture, (4) draw the various threads together, and (5) bring it to bear on the Christian life."
The author states the purpose of The Trinity is to recatechize the evangelical mind after the Trinitarian controversy of 2016 revealed the need for clarity among evangelicals.
I have mixed feelings on The Trinity--the book not the doctrine. On the one hand, it's overly complicated and complex. I feel the author would rather use a string of long syllable words that few actual laymen know the definition of instead of more straight forward language that anyone and everyone could appreciate and understand. This book almost needs an interpreter. Someone to translate the scholar-ese into English. On the other hand, it is comprehensive and saturated in Scripture rather than conjecture. Each chapter does develop the doctrine of the Trinity drawing largely if not exclusively from Scripture itself. (A few creeds and church fathers are also mentioned, though their contribution to the argument the author is making is supplemental and supportive rather than foundational and fundamental.)
Here--for better or worse--is my interpretation of what the book is about. It's entirely possible that I missed key points because as I said earlier this book is overly complicated and complex--a bit full of itself.
What does the Bible have to say about the Trinity? Which passages shed light on the doctrine of the Trinity? What can we learn by reading and studying passages on God the Father, God the Son, and God the Spirit? How are these three as being the same one true God? How does Scripture distinguish between the Father, the Son, and the Spirit? How does the Trinity work together for our salvation? What is the role of the Father, the Son, and the Spirit in relation to our creation, redemption, salvation, etc. Why is important for Christians to believe in the doctrine of the Trinity? Why is it important for Christians to understand the persons and works of each member of the Trinity? What effect does this knowledge have on our worship?
Here's some sample sentences:
© Becky Laney of Operation Actually Read Bible
Posted by Becky at 11:06 AM