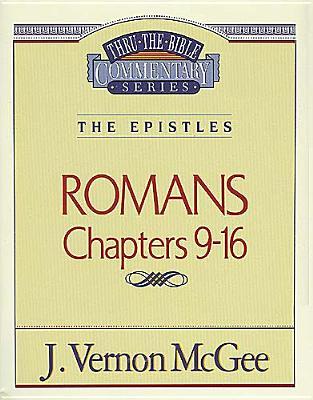 I am reading the Bible in 2020 using the daily M'Cheyne (Robert Murray M'Cheyne) plan. I thought it would add a layer of substance to in addition to the four chapters a day, to also read commentaries for those chapters. For that I am using Matthew Henry's Commentary on the Whole Bible. But the plan goes through the New Testament (and Psalms, I believe) twice. So now that I've finished Henry's commentary for the New Testament, I am tackling the New Testament commentary section of J. Vernon McGee's series.This is not my first time reading J. Vernon McGee. I've read twelve or so of his commentaries. (Most recently his volume on Romans 1-8.)
Overall, I like his laidback, casual, straightforward, tell it like it is approach to teaching Scripture. There is something so grounded and down to earth about him. Each reader is "his" friend. It's hard not to feel like he is a friend too.
One of the things that I love about McGee's commentaries is that he just speaks timeless truths. He almost always leaves me thinking!!!

I have read this book previously--in 2013. It was probably one of the first McGee commentaries I read.
I will tell you here and now I do not always agree with McGee when it comes to the book of Romans--or any book where God's sovereignty over man's salvation comes up for discussion. Though you can pick and choose McGee quotes quite carefully to make him sound Reformed (aka Calvinist), he would never in a million years self-identify as such. Free Will was big for McGee. And though he never once says anything hostile about God's Sovereignty in general or attacks the doctrine of divine grace, he hasn't reconciled himself to TULIP. Though oddly enough he likes to use the phrase Total Depravity!!!


My friend, although we cannot intrude into the mysterious dealings of God, we can trust Him to act in justice. We cannot avoid the doctrine of election, nor can we reconcile God’s sovereign election with man’s free will. Both are true. Let’s keep in mind that this is His universe. He is sovereign. I am but a little creature on earth, and He could take away the breath from me in the next moment. Do I have the audacity to stand on my two feet, look Him in the face, and question what He does?

The idea of a superior race or an inferior race is ridiculous. The ground at the foot of the cross is all level. Whoever you are, your social position, your church membership, your good works, or the color of your skin will not help you. Without Christ you are a hell-doomed sinner. God is just and righteous when He says that to you. Perhaps you say, “I don’t like what that preacher said.” Well, it is actually what God said, my friend. God is putting it in neon lights here. He doesn’t want you to miss it.

The average church today is as dead as a dodo bird. A fellow said to me some time ago concerning the church, “I would just as soon go out and play golf on Sunday.” Knowing the church he attended, I understood how he felt. In fact, I believe he could be more spiritual out on the golf course than he could be in a service in that church. The point is that he should find a church that is really preaching Christ.

Many thinking people are very pessimistic about the future of our civilization. But my God is on the throne, and He is going to straighten it out. The greatest days are yet in the future. Oh, the glorious future a child of God has. If I were not a dignified preacher, I would say Hallelujah!

Oh, my friend, God is doing what is best for us. We may not understand the things that happen to us, but we must believe that it is for our good that God allows them. We are like little children, and we cannot understand God’s ways. Our circumstances may not always seem to be good, but they come from the “depth of the riches both of the wisdom and knowledge of God.”

The conduct of the Christian must be expressed in this world by his relationship to those with whom he comes in contact, and these relationships must be regulated in some way. It is so easy to put down rules of conduct, but Paul is not doing that. He has delivered us from the Mosaic Law, and he did not deliver us in order to put us under another legal system. There are a lot of Christians who call themselves separated Christians because they don’t do this, they don’t do that, and they don’t do about fifteen other things. I wish they would do something, by the way. I have found that those folk have gossipy tongues—you had better watch them. They ought to recognize that the child of God is not given rules and regulations.

Therefore, I beg of you, brethren, by the mercies of God that you yield your bodies—your total personalities—a living sacrifice, set apart for God, well-pleasing to God, which is your rational or spiritual service. We are called upon to “present”—to yield. This is the same word we had, you recall, back in chapter 6. Although some expositors suggest that there it refers to the mind while here it refers to the will, I think it is a false distinction. The appeal in both instances is to the will. In the sixth chapter, the way to Christian character is to yield to Him. Here yielding is the way to Christian consecration and conduct. He says to yield “your bodies,” your total personalities. The body is the instrument through which we express ourselves. The mind, the affections, the will, and the Holy Spirit can use the body.

We need men and women with backbone to express their hatred for that which is evil.

“Cleave to that which is good.” Cleave means to stick like adhesive tape, to be welded or cemented together with the good things. The believer should always be identified with good things rather than shady or questionable practices.

“Rejoice with them that do rejoice.” The world’s motto is “Laugh and the world laughs with you; weep and you weep alone.” But that is not true of the believer. We are to enter into the joys and sorrows of other believers. Weep with those who weep. “Be of the same mind one toward another” doesn’t mean uniformity of thought but that we are to have the mind of Christ. Believers ought to enter emotionally into the lives of other believers. I think that is something that makes genuine Christians so wonderful.

We live in a day when evil is called good and good is called evil.

We are to submit ourselves to governmental authorities for the very simple reason that they are ordained of God. It is true that the kingdoms of this world belong to Satan and that injustice and corruption abound in all governments; yet God still has control. History is the monotonous account of how a government flourished for a time in pomp and pride and then was brought to ruin and rubble. Why? Because corruption and lawlessness became rampant.

Christianity is not a movement to improve government or to help society clean up the town. It is to preach a gospel that is the power of God unto salvation which will bring into existence individuals like the men who signed the Declaration of Independence and gave us a government of laws.

My friend, nothing is wrong with our form of government; there is something wrong with the individuals who are in positions of power.

Oh, how many believers are making every provision for the flesh but are making no provision to go into His presence. My friend, I beg you to put Christ first in your life and to get out the Word of God. This is all important.

“Let every man be fully persuaded in his own mind” means literally he is to be filled to the brim—mind, heart, will, and the total personality. A believer should do only those things to which he can give himself fully and without reserve. My friend, whatever you do for God, you should do with enthusiasm.

The greatest sin in the church of Jesus Christ in this generation is ignorance of the Word of God. Many times I have heard a church officer say, “Well, I don’t know much about the Bible, but …” and then he gives his opinion, which often actually contradicts the Word of God! Why doesn’t he know much about the Bible? These things were written aforetime for our learning. God wants you to know His Word. As an officer of the church, are you boasting that you are ignorant of the Word of God? Well, you had better get down to business and find out what God has said to you in His Word. Ignorance of the Bible is the greatest sin of the hour—in and out of the church.

What will a knowledge of the Bible do for you? “That we through patience and comfort of the scriptures might have hope.” The Word of God imparts patience, comfort, and hope.


© Becky Laney of Operation Actually Read Bible
Posted by Becky at 11:24 AM