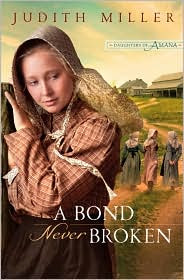 I had failed. There was no other way to justify our presence at the train station.

Racial tension plays a role in Judith Miller's latest set in 1917/18. Hatred against Germans is running high, and violent 'patriotic' groups are on the rise too. War has a way of changing things even in Amana Colonies. A Bond Never Broken is narrated by two young women. Jutta Schmidt is returning to Amana Colonies under false pretenses. Her family who owns a bakery in Marengo, Iowa, has been threatened by the Iowa Council of National Defense (American Protective League). They could lose everything--including their freedom, their lives--if Jutta doesn't turn spy and report on the 'unpatriotic' activities of the Amana Colonists. Ilsa Redlich, the second narrator, is the daughter of the owners of the local hotel, the hotel that comes to employ Jutta. She's upset by the war--the fact that her brother has joined the army, the fact that the man she is to marry might be drafted at any time. Their friendship is built on a lie--but it may just prove true and strong nonetheless. For there is someone who poses a danger to the town...and together they may just discover it in time.

A Bond Never Broken is the third in Judith Miller's Daughters of Amana series. The first two titles are Somewhere to Belong and More Than Words. Though these books are part of a series. Each does stand alone. There are different narrators for each, and they're set in different time periods: 1870s, 1880s, 1910s.
I've enjoyed each book in the series so far. This one was intense and compelling.