Book Review: Love Amid the Ashes 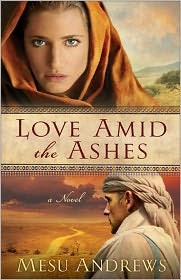 Love Amid the Ashes. Mesu Andrews. 2011. Revell. 411 pages.
Dinah's leaden feet left no print in the sun-baked soil of Grandfather Isaac's Hebron camp. He had fought death's pale rider for many days, but his aging lungs finally lost the battle for breath. He was gone. Her sun and moon and stars, the only man who had seen beyond Dinah's shame and loved her after Shechem. Her heart felt as desolate as the dwindling wadi, where she knelt to rinse the rags with which she'd washed and anointed Grandfather's body

I didn't like this one. But I am going to do my best to be fair and honest. Because reading is completely subjective. Just because I didn't like it doesn't mean that you won't like it.

Love Amid the Ashes is the romance between Job and Dinah. Inspired--to some degree at least--by the latter part of Genesis and Job. It makes Job contemporaries with Jacob, Esau, Isaac, Dinah, and Joseph. (I'd always thought of Job as being after the Tower of Babel (Genesis 11) but slightly before Abraham (Genesis 12-25). Or perhaps overlapping the earlier years of Abram/Abraham and Sarai/Sarah.)

In the book of Job, readers are let in on a little secret in chapter one.


6Now there was a day when the sons of God came to present themselves before the LORD, and Satan came also among them.

7And the LORD said unto Satan, Whence comest thou? Then Satan answered the LORD, and said, From going to and fro in the earth, and from walking up and down in it.

8And the LORD said unto Satan, Hast thou considered my servant Job, that there is none like him in the earth, a perfect and an upright man, one that feareth God, and escheweth evil?

9Then Satan answered the LORD, and said, Doth Job fear God for nought?

10Hast not thou made an hedge about him, and about his house, and about all that he hath on every side? thou hast blessed the work of his hands, and his substance is increased in the land.

11But put forth thine hand now, and touch all that he hath, and he will curse thee to thy face.

12And the LORD said unto Satan, Behold, all that he hath is in thy power; only upon himself put not forth thine hand. So Satan went forth from the presence of the LORD. (Job 1:6-12, King James Version)

And again in chapter two:

2And the LORD said unto Satan, From whence comest thou? And Satan answered the LORD, and said, From going to and fro in the earth, and from walking up and down in it.

3And the LORD said unto Satan, Hast thou considered my servant Job, that there is none like him in the earth, a perfect and an upright man, one that feareth God, and escheweth evil? and still he holdeth fast his integrity, although thou movedst me against him, to destroy him without cause.

4And Satan answered the LORD, and said, Skin for skin, yea, all that a man hath will he give for his life.

5But put forth thine hand now, and touch his bone and his flesh, and he will curse thee to thy face.

6And the LORD said unto Satan, Behold, he is in thine hand; but save his life.

7So went Satan forth from the presence of the LORD, and smote Job with sore boils from the sole of his foot unto his crown.

8And he took him a potsherd to scrape himself withal; and he sat down among the ashes.

9Then said his wife unto him, Dost thou still retain thine integrity? curse God, and die.

10But he said unto her, Thou speakest as one of the foolish women speaketh. What? shall we receive good at the hand of God, and shall we not receive evil? In all this did not Job sin with his lips. (Job 2:1-10, King James Version)

This framework, from my perspective, is missing in Love Amid the Ashes. Now I am NOT saying that God isn't present in Mesu Andrews' work. Job believes in God. He worships God. God is everything to him. And Job is always, always ready to talk about God with any one in his life. But we don't hear from God until "God's speech" in the last part of the philosophizing or debating (Job 38-41).

One big difference between the biblical narrative and this fictional account is in perspective, in cause and effect. (Though I'm not completely comfortable with those terms.) The novel sees things humanly. Job's downfall, his destruction, his fall from riches to rags comes from human hands. There is an evil, sinister, vicious, cruel man, Sayyid, who is the cause of Job's trials and tribulations. (Sayyid reminded me very much of Jafar.) Likewise, Job's restoration, Job's happily ever after, his rise from rags to riches, is seen as coming from human hands--from Dinah's brother, Joseph, who has come to power and wealth and prestige in Egypt. In the bible, both are seen as coming straight from God. It may seem like a small thing, and maybe it is a small thing to you, but for me it was a big thing.

Let's talk characters. Dinah, when we first meet her, is bitter and angry and grieving. After being cast out by her family (her father and brothers) after her disgrace of being "raped," she took refuge with Grandfather Isaac who was able to look past her shame and forgive her. In this version, Dinah was an all too willing participant. She knew that she should get her father's permission before acting as a wife, but she felt married in that moment. There is a ceremony with Shechem, it's just not recognized as being valid by her father and brothers. There is much BLOOD shed. And Dinah is someone considered repulsive and horrid. She disgusts people. Her very presence angers people. (Of course, all this is fictional speculation. We have no idea how Dinah was treated by her father, by her mother, by her brothers, by her cousins, by her former friends and acquaintances, by the surrounding communities and regions. We have no idea how far widespread this "scandal" really was.) But the bigger the disgrace, the more dramatic the story.

But now that Isaac has died, Dinah's future is uncertain. Her Grandfather was arranging a marriage with an Edomite, Job's oldest son. (Job is doing the arranging on his son's behalf.) Job and Isaac strongly believe in this connection, this alliance. They see it as a way to bring Esau's descendants into "the promise" or "the covenant." (Because Jacob is the chosen one (chosen over Esau), and Dinah is Jacob's daughter.) Think that's confusing? Job's son is part Ishmaelite, and the Ishmaelites are trying to work their way back into the promised line as well.

Job sees Dinah as someone in need of love and kindness and a new beginning. He sees her as someone that God loves. He sees the pain in her life. He knows that there is one to heal, one to forgive, one to restore. He knows that Dinah needs to meet God. That Dinah needs to be in right relationship with God. So Job teaches her about sacrifices, about atonement, about prayer, about fellowship. And Job does his best to show her that forgiveness is the only right way to live life.

So Job takes Dinah with him to be his son's wife. But there is a BIG problem! Before he can even have the servants begin to unpack, Job begins to receive horrible messages announcing one calamity after another. He's lost his sons and daughters. He's lost his animals, his herds and flocks, his "wealth." He's lost almost all of his servants. Dinah's future husband is lost to her before they could ever meet. What is to become of her now? Job, her host, is kind but broken. He's afflicted physically, mentally, emotionally. And Job's wife, Sitis, well she's got BIG, BIG issues of her own. (So big, I'm not even sure I should try to explain!)

Most of Love Amid Ashes occurs in the one week of silence, the gap between Job 2 and 3. And it's filled with drama and action. Mainly centered on Job's wife and the evil, evil man Sayyid. Dinah spends her time caring for Job, for seeing to his wounds, to nursing him the best she can. But it's also a waiting time. They are waiting to see what Job's "friends" will do, waiting for them to arrive, waiting to see if Sayyid can be brought to justice. Once they arrive, once the discussions begin, the plot turns a bit more familiar.

There is much drama and conflict and action. Much more than what is in the actual book of Job. But I could see why it would be hard to turn four or five men sitting around talking into a novel, into a romance at that. After all, Job already has a wife. She may be only someone Job could love. But she's got to be done away with somehow for Dinah to get her happily ever after.

By combining Dinah's story with Job's story, a few complications arise in my opinion. It just felt a bit messy to me. I liked Job's strength, his relationship with God, his perseverance. And I could appreciate Dinah's newfound faith. She's a woman just discovering for the first time perhaps that God is a forgiving God. That there is life free from shame, from guilt. She's a woman discovering hope after years of bitter despair. So there's a raw beauty in that which I could appreciate to a certain degree. But. I would have liked it more, perhaps, if Dinah's story had been Dinah's story and Job's story had been Job's story. I hope that makes sense.

© 2011 Becky Laney of Operation Actually Read Bible
Posted by Becky at 3:29 AM