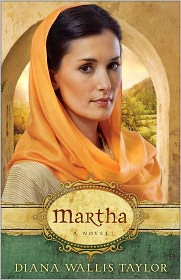 Martha watched her father walk slowly up the road as the afternoon shadows appeared, and he was smiling.

Diana Wallis Taylor's newest novel is about Martha, the sister of Mary and Lazarus. Her story--in the Bible--can be found in Luke 10 and John 11 and 12.

I enjoyed this novel. I enjoyed the fictional framework of it. How we see Martha, Mary, Lazarus, and their father, Ephraim, within their community of Bethany. How we get a glimpse of this culture, the customs of village life, etc. (We see births and deaths and weddings and funerals and feasts and festivals and such.) Martha, as the oldest, has taken charge of this household. We see her hard at work, but we also see her as truly loving her family and watching out to see that all their needs are met. We see her in tender, loving relationships with her father, sister, and brother. We also see her friendship with Esther. Esther's father, Simon, is a leper for many years before being miraculously healed by Jesus. (Presumably the Simon mentioned in Matthew 26:6-13 and Mark 14:3-9).

When the novel first opens, we see her dreaming of more. We see her wanting to get married and have a family of her own. Her father tries his best to arrange a marriage for his daughter, but, that doesn't quite work out as hoped. Taylor gives Martha a bittersweet love affair (and by affair, I don't mean something trashy or impure; I mean she loves him and he loves her, and the two want to get married and live happily ever after...) with a God-fearing Roman soldier, who is killed in the line of duty. If he had lived, Martha would have happily left her family and her community behind. But, of course, he didn't live. So Martha remains year after year. Martha, after several years, comes to accept her singleness and welcomes her role as being the caretaker in her own family.

The strength of this novel is in the imagining of village life during the time of Christ. The scenes taken directly from Scripture, however, feel flatter. Not in a bad way. I'll try to clarify what I mean exactly by that. There is a richness in the Scripture text. There just is something wonderful about the Scripture itself.  There is already drama and emotion and dialogue. It doesn't need any creative touches on the author's part to make it better. It can't be made better. In fact, if these scenes were changed too much, it would be more of a criticism against the author. So reading those scenes in the book made me want to read the Scriptural account of these events. Which is why I said it wasn't a bad thing.


Now as they went on their way, Jesus entered a village. And a woman named Martha welcomed him into her house. And she had a sister called Mary, who sat at the Lord's feet and listened to his teaching. But Martha was distracted with much serving. And she went up to him and said, "Lord, do you not care that my sister has left me to serve alone? Tell her then to help me." But the Lord answered her, "Martha, Martha, you are anxious and troubled about many things, but one thing is necessary. Mary has chosen the good portion, which will not be taken away from her." (Luke 10:38-42, ESV)

I do recommend reading John 11 in its entirety. But here are the Martha bits:


Now when Jesus came, he found that Lazarus had already been in the tomb four days. Bethany was near Jerusalem, about two miles off, and many of the Jews had come to Martha and Mary to console them concerning their brother. So when Martha heard that Jesus was coming, she went and met him, but Mary remained seated in the house. Martha said to Jesus, "Lord, if you had been here, my brother would not have died. But even now I know that whatever you ask from God, God will give you. Jesus said to her, "Your brother will rise again." Martha said to him, "I know that he will rise again in the resurrection on the last day." Jesus said to her, "I am the resurrection and the life. Whoever believes in me, though he die, yet shall he live, and everyone who lives and believes in me shall never die. Do you believe this?" She said to him, "Yes, Lord; I believe that you are the Christ, the Son of God, who is coming into the world." When she had said this, she went and called her sister Mary, saying in private, "The Teacher is here and is calling for you."  (John 11:17-28, ESV)

And a brief mention in John 12:


Six days before the Passover, Jesus therefore came to Bethany, where Lazarus was, whom Jesus had raised from the dead. So they gave a dinner for him there. Martha served, and Lazarus was one of those reclining with him at a table. Mary therefore took a pound of expensive ointment made from pure nard, and anointed the feet of Jesus and wiped his feet with her hair. The house was filled with the fragrance of the perfume. But Judas Iscariot, one of his disciples (he who was about to betray him), said, "Why was this ointment not sold for three hundred denarii and given to the poor?" He said this not because he cared about the poor, but because he was a thief, and having charge of the moneybag he used to help himself to what was put into it. Jesus said, "Leave her alone, so that she may keep it for the day of my burial. For the poor you always have with you, but you do not always have me. (John 12:1-8, ESV)

Diana Wallis Taylor has also written Journey to the Well.


© Becky Laney of Operation Actually Read Bible
Posted by Becky at 11:29 AM