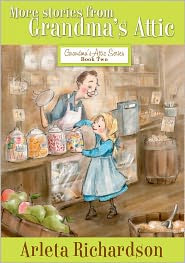 From The Nuisance in Ma's Kitchen


When Grandma called from the backyard, I knew I was in for it. She was using her would-you-look-at-this voice, which usually meant I was responsible for something.

"What, Grandma?" I asked once I reached the spot where she was hanging up the washing.

"Would you look at this?" she asked. "I just went into the kitchen for more clothespins and came back out to find this."

I looked where she was pointing. One of my kittens had crawled into the clothes basket and lay sound asleep on a clean sheet.

"If you're going to have kittens around the house, you'll have to keep an eye on them. Otherwise leave them in the barn where they belong. It's hard enough to wash sheets once without doing them over again."

The stories from this collection are:


The books are decidedly moral, decidedly Christian. Most--if not all--stories have a definite moral or lesson attached to them. And these lessons are clearly stated or restated at the end of each story so there's no possibility of missing what the author wants you to know. Technically, I suppose this makes these stories didactic in nature. And technically, "modern" readers are supposed to frown on didactic literature whether they agree with it or not. But. You won't be hearing me complain. No. I still love these books. I do. There's no talking me out of it. Call me old-fashioned. But I will stay a loyal fan of these!