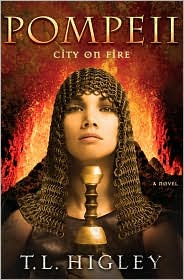 In the prologue, readers meet Ariella, a young Jewish woman fleeing a fallen Jerusalem. She's witnessed the destruction of the temple and was devastated by the loss of her family. Taken into slavery by the Romans, Ariella's nightmare is just beginning.

The text picks up nine years later, readers witness Ariella's brave escape from her cruel master, Valerius, where she takes the place of a young boy--a gladiator. With this gladiator troupe, maybe just maybe, she can escape from slavery completely. If she survives long enough.

The gladiator troupe is journeying to Pompeii. And that is where most of the novel is set. In the months leading up to its destruction. Readers learn of Ariella and are introduced to Cato and his family.

Cato first becomes interested in Ariella--whom he knows as Ari--soon after the gladiators arrive. He's drawn to "the boy" but doesn't know why. He's newly moved to the city himself. He's embarrassed by something in his past--a business failure or political failure, I'm not sure which. But he's looking to find a new start. There are plenty in town who welcome him. Some even see him as a possible savior. Could this newcomer be the one to rescue the city from the cruel politician Maius? Can they convince him to run for office? He's got his doubts. But after witnessing Maius' cruelty time and time again, he's convinced that someone has to do it.

Ariella and Cato's stories connect, of course, and her truth is revealed.

Throughout the book readers hear from Vesuvius herself, the volcano destined to destroy the city and leave few survivors. These paragraphs were the hardest for me to read. Why? I'm not sure that much foreshadowing was needed. And it's just not natural for volcanoes or mountains to talk let alone have a story to tell.

I do read quite a bit of Christian fiction, but I would probably pass on this one...I'm not that interested in that era. As always, though, great review!

Hope you'll stop by mine...
Cindy at Cindy's Book Club