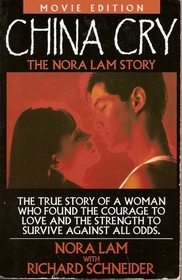 It was a beautiful Shanghai spring afternoon in 1953 when two classmates and I bicycled home from classes at Soochow University.

I haven't thought about China Cry in years. I originally saw the movie and read the book when I was in junior high--around the time they were released. But. Last month, I happened to discover Pearl Buck, and I read a handful of her novels set in China. (Kinfolk and East Wind: West Wind were my favorites.) And reading those books made me curious about reading--or rereading China Cry.

The book isn't perfectly chronological, though I never found it confusing, but it roughly covers the author's life in China in the 1940s, 50s, and 60s, and her life in America--her life as a missionary--in the 1970s and 80s. The reader gets a glimpse of what life was like during World War II and in the following years as China became communist. What was it like to grow up during this time? How do you find balance between what you're taught in the classroom and what you see for yourself on the street. For our heroine, Sung Neng Yee, it's a struggle. To learn in the classroom that Communism is wonderful and just and the answer to all of life's problems. Yet to witness injustice, cruelty, and violence in the streets. To see--to feel--the hatred, the bitter, bitter hatred of the soldiers. Even if she's not the center of that injustice, it still bothers her.

In college, Sung Neng Yee meets a man, Lam Cheng Shen. They fall in love. They marry. They begin their family. He's working, she's working, and if either doubt the system, well, they're not troublemakers. They go along with things peaceably. But this "happily ever after" sours when they begin to question the loyalty of both husband and wife. As Sung Neng Yee is taken into custody (she was a teacher) and is forced to write her life story over and over and over again. As she's interrogated, questioned, bullied. Do they want the truth, the real truth? Or do they just like having power and control over others? Who knows. Regardless, several things make her suspect--in their eyes. Her father spent fourteen years in France training to be a doctor. As a child, she attended private schools--Christian schools. As a child, she reportedly became a Christian. Her husband's family lives in Hong Kong. Etc. If it is true that she's a Christian, then, they'll have something they can use against her.

The day comes when she's forced to make the ultimate decision...

This was my Rubicon. For an instant, the temptation was strong. Why not deny it? A dark voice seemed to whisper to me. After all, you believe in your heart, and God certainly knows, it wheedled. Why not satisfy this brute with a simple "no" and save yourself further torture?

I could feel the warm blood on my chin and thought of Jesus on the cross, blood running down His face.

"He may be distant from me," I gasped, "but I will not deny His presence."

My interrogator fairly pulsed with hate. Thrusting her livid face into mine, she demanded. "Answer me, whore! Yes or no?"

Now I could see my Savior clearly, looking down at me from the cross with love and understanding. I was glad for the blood running down my face, the pain in my body.

"Yes or no!" screamed my interrogator, spittle spraying me.

"Yes! Oh yes!" I cried out joyfully, enthusiastically. "Yes, I am a Christian!"

At my declaration, the interrogator exploded in a demonic fury. Shaking with rage, she stepped forward to strike me again, then stopped, turned to the two soldiers with her and shouted, "Take her out and shoot her!" (128)

That may sound like the end of her story--a dramatic end to her life. But that is just the start, for God has plans for her, and he knows how to act, how to provide! Soon after her deliverance, she hears him speak to her, promising that he will deliver her, her husband, her entire family, from Communist China. That he will lead them all to freedom. And she takes him at his word. End of story.

China Cry is a powerful story, very compelling. It's emotional and intense. A story just as powerful, perhaps, as that told in Through Gates of Splendor. Though not in the same way. In Through Gates of Splendor he called five men to give their lives in His cause--to bring the gospel to people. In China Cry, he uses one woman's life--her story, her ministry--to bring the gospel to others. But God's glory shines through in each book. In both books, we see believers acting in faith, trusting on God, being willing to surrender it all for Him. In both books, we see God as good, as sovereign, as mighty.

Becky, I've heard great things about this book--I really need to put it on my to-read list!

Your review was beautifully-written. I'll be following you!