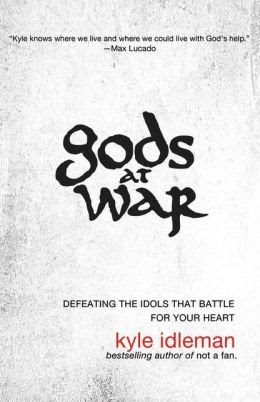 Gods at War: Defeating the Idols That Battle for Your Heart. 2013. Zondervan. 240 pages.

Imagine a man who has been coughing constantly. This cough keeps him up half of the night and interrupts any conversation he has that lasts more than a minute or two. The cough is so unrelenting that he goes to the doctor. The doctor runs his tests. Lung cancer. Now imagine the doctor knows how tough the news will be to handle. So he doesn't tell his patient about cancer. Instead, he writes a prescription for some strong cough medicine and tells him that he should be feeling better soon. The man is delighted with this prognosis. And sure enough, he sleeps much better that night. The cough syrup seems to have solved his problem. Meanwhile, very quietly, the cancer is eating away at his body.

In Kyle Idleman's latest book, he argues that the root of all struggles--sin and temptation struggles--facing Christians can be traced back to idolatry. He argues that idolatry is "the trunk of the tree, and all other problems are just branches" (27). In the first chapter, he explains,


"So if you start scratching at whatever struggle you're dealing with, eventually you'll find that underneath it is a false god. Until that god is dethroned, and the Lord God takes his rightful place, you will not have victory. Idolatry isn't an issue; it is the issue. All roads lead to the dusty overlooked concept of false gods. Deal with life on the glossy outer layers, and you might never see it; scratch a little beneath the surface, and you begin to see that it's always there, under some other coat of paint. There are a hundred million different symptoms, but the issue is always idolatry" (22).

Gods at War is reader-friendly. Idleman writes to be understood. Some of his ideas may challenge readers to reflect and consider, but that's a good thing! Most of the chapters include a personal story or two illustrating Idleman's main point. Also each at the end of each chapter, Idleman has questions for readers.


We want to focus on the outside, but Jesus makes the point that it's all about what's inside. The heart is the battleground for the gods because everything flows from it. (36)

The entire Bible is a love letter to humanity in the form of a story, so that we'll see what God has seen since he first created us; so that we'll know all the ways we've insulted his love and all the ways he has redoubled his pursuit. (49)


© Becky Laney of Operation Actually Read Bible
Posted by Becky at 8:30 AM