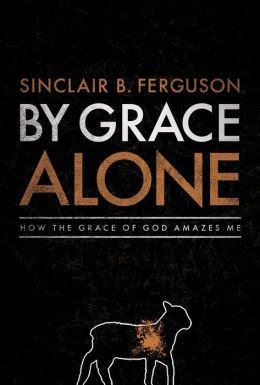 By Grace Alone is a wonderful book by Sinclair Ferguson. In By Grace Alone, he paints a wonderful portrait of grace and mercy and love! The chapters are: "My Chains Fell Off," "Unconditional Love," "At God's Expense," "A Great Exchange," "Guaranteed Security," "Delivered From Evil," and "True Freedom." If you aren't quite sure what grace is all about, what grace looks like, feels like, read this book!

In another chapter, he examines Jesus as prophet, priest, and king. He talks about how we see Christ in those three roles on the cross. I felt I learned so much by reading this one!


We do not become sinners by committing specific acts. We commit specific acts of sin because we are sinners. (3)

No one can will the will to will what it will not will! Only God's grace can set us free to come to trust in Him. (4)

The One who was being despised as Prophet, as Priest, and as King actually was God's Prophet, Priest, and King--the Christ, the Savior. He was actually doing what they were cynically calling out for Him to do. They, however, spoke in ignorance; they did not understand that if He was to save others, He could not save Himself. (43)

The two charges leveled against Jesus were blasphemy (that He had made Himself equal with God) and treason (that He had rejected lawfully constituted authority). Why were those two charges so significant? It was because these are the charges each of us faces before the judgment seat of God. In that court, I am guilty of blasphemy, because I have made myself rather than God the center of the universe. I am also guilty of treason, since I have sought to overturn His lawfully and graciously constituted authority over my life. Blasphemy and treason were also the crimes of Adam. These are the age-old crimes of which every one of us--old and young, rich and poor, wise and simple, famous and infamous--stands accused. We are on the same charge sheet. We are all guilty. But Jesus has come! (44)

The gospel is an invitation to receive a gift. But many people hear it as a summons to do better. Paul makes it clear that the gospel is not about something we do. It is about what God has done for us in Jesus Christ. (48)

Contemporary men and women find it almost impossible to conceive that they were made to glorify and to enjoy God. It would perhaps be more accurate to say that the very idea of living for the glory of God appears to be many people's idea of hell. (50)

You did not, do not, and cannot earn your own salvation. You can contribute nothing to it in any way. It is not earned by your achievements, your merit, your faith, your level of sanctification, your faithfulness, or your Christian service. Reconciliation is a free gift of grace from beginning to end. Christ already has done everything that is needed in order to take your sins and to transfer His righteousness to you. (54)