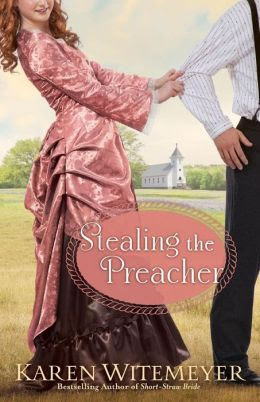 Crockett Archer stretched his legs into the aisle as the train pulled away from the Caldwell station. Only a brief stop in Somerville remained before his arrival in Brenham--the place where his life's work would begin. A wide grin spread across his face as he contemplated his future.

Did I love, love, love Stealing the Preacher? No, I wouldn't go that far. I did like it, however. This historical romance was cute and predictable.

Joanna, our heroine, really wants a preacher to be found for their local church. They've been without a preacher for so long, and she truly misses Sunday morning services. She misses it for herself, and has concerns for her community too. But perhaps her biggest concern is for her own father. He is not a Christian, and that worries her. She has spent most of her life praying for her father.

So this historical romance starts with a father and his friends holding up a train. Joanna's father--a former outlaw--has kidnapped Crockett Archer. His precious daughter wants a preacher for a birthday present, she'll get a preacher for a present. Now was Joanna's birthday wish genuine? Not in the way her father interpreted it! She wants a preacher for the community, but she wants to go about it the right way! She certainly doesn't want him to be "hers." She's not that bold and forward.

Crockett is quite forgiving about the misunderstanding. Joanna's loveliness and sweetness perhaps being a good influence. He promises to spread the word about the community's need for a preacher. However, he ends up staying himself. He even ends up working on Joanna's father's ranch.

If that was all there was to the story--a romance between these two, the thawing of her father's hardened heart, it would be a lovely story. Or even with the addition of the young-boy-in-need-of-guidance-who-is-mentored-by-the-new-preacher element added to the story it would be nice. However, the story becomes messy by the addition of unnecessary characters that ruin some of the sweetness of the story. I'm speaking of the oh-so-forward, oh-so-outrageous Holly Brewster. That aspect of the story did not work for me at all.