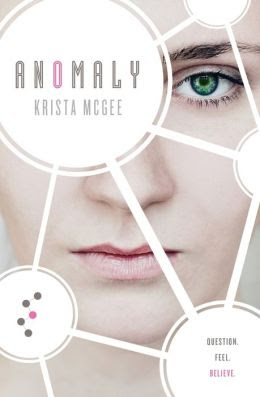 Fifteen minutes and twenty-three seconds. That's how long I have to live. The wall screen that displayed the numbers in blood-red letters now projects the image of a garden.

I enjoy reading dystopian novels and post-apocalyptic novels. It is one of my favorite science fiction sub-genres. There aren't as many titles published by Christian authors and Christian publishers in this sub-genre, so I was very delighted to discover Anomaly.

Thalli, our heroine, was designed to be a musician. She is THE musician of pod B. But unlike others in her generation, Thalli is curious, questioning, emotional. She is more observant, more thoughtful--always wanting to know why. Thalli knows this gets her into trouble sometimes, that she is not supposed to question authority or ever be curious enough to ask why. (For the record, Thalli is not rude, obnoxious, or disrespectful.) So Thalli is generally careful about appearances, about covering up what makes her so different. But one day that becomes impossible. Thalli is asked to play a new-to-her piece of music, a song from "before", a song by Bach, Jesu, Joy of Man's Desiring. She's overwhelmed with emotion. She cries. This is when they know beyond all question, that she's an anomaly. They take her away from her pod, away from the only home she's known, and put her in a cell. She's scheduled to be eliminated...

There is a man, an old man, who is not allowed to speak with anyone--of any generation, but especially these new ones that have only known life deep underground--a man of faith. It is only to the dying that he's allowed to speak. His name is John, and he speaks to her of a Designer.

Berk is a young scientist from Thalli's generation. The two have always been really close. When he learns of her fate, he decides to do whatever he can to save her...but will it be enough?

I really LOVED this one.