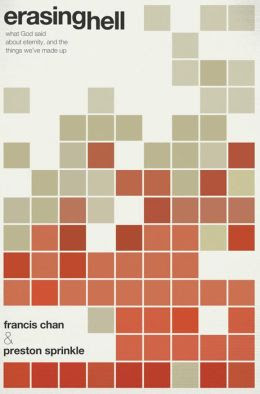 Erasing Hell: What God Said About Eternity, and the Things We Made Up. Francis Chan and Preston Sprinkle. 2011. David C. Cook. 208 pages. [Source: Library]

He briefly explores the beliefs of various universalists (types of universalists, not individuals). He briefly explores the work of Rob Bell. (But only briefly. The focus of this one is not to examine Bell's book page by page, chapter by chapter, argument by argument.) The focus is not personal. It is not what do I personally believe; it is not what do the majority of people believe; it is not what I wish were true. Chan is reliant on the Word of God. He asserts that hell is real precisely because that is what the Bible reveals. He asserts that hell is eternal, that punishment is eternal, because that is precisely what the Bible tells us plainly. He asserts that heaven is for believers, and that those who reject Christ during their lives, are eternally lost, that there are no second chances. Why? Because the Bible assures us that this is so. The hope of second chances (or third or fourth or fifth chances) cannot be found in Scripture. That is why the gospel is so urgent.

Chan does not discuss the subject gleefully. It is not a laughing matter, a light matter. It is a sobering subject, and Chan treats it as such.


Don't believe something just because you want to, and don't embrace an idea just because you've always believed it. Believe what is biblical. Test all your assumptions against the precious words God gave us in the Bible (15)

Nothing outside of God and His truth should be sacred to us. And so it is with hell. If hell is some primitive myth left over from conservative tradition, then let's set it on that dusty shelf next to other traditional beliefs that have no basis in Scripture. But if it is true, if the Bible does teach that there is a literal hell awaiting those who don't believe in Jesus, then this reality must change us. It should certainly purge our souls of all complacency. (16)

Refusing to teach a passage of Scripture is just as wrong as abusing it. (102)

Excellent review of a very serious subject. I passed this book on to other family members to make sure they had the Biblical understanding of hell. It is a future that so many are headed for and as you said the Gospel is URGENT! We must share it and get the GOOD NEWS of Jesus Christ in their hearts!

The more I read the Bible, the more convinced I am that the traditional view isn't supported. I find much more support for the conditionalist and universalist positions. I'm looking forward to Steve Gregg's book giving all the evidence for all three positions.

But no matter how you cut it, it's still best for anyone to be saved *now*, because God deserves that honor.

The more I read the Bible, the more convinced I am that the traditional view isn't supported. I find much more support for the conditionalist and universalist positions. I'm looking forward to Steve Gregg's book giving all the evidence for all three positions.

But no matter how you cut it, it's still best for anyone to be saved *now*, because God deserves that honor.