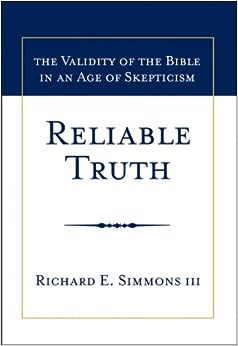 Reliable Truth was a good book. I found it to be well organized and nicely written. The book is divided into eight chapters, almost each chapter focuses on a different argument as to why the Bible is reliant and true and trustworthy. Chapters two through seven focus on these arguments: "The Historical Record," "The Archeological Record," "The Ancient Writings," "The Reach of Science," "The Moral Imperative," and "The Life of Jesus." Each chapter is informative and packed with research, quotes, and real-life illustrations. He'll highlight various men and women who were atheists or agnostics or nonbelievers and share their faith-story, their conversion experiences. He is very fond of quoting C.S. Lewis, I noticed! I didn't love all the examples he used. Anne Rice "announcing" her conversion (which I believe she later retracted?) does not really "help" anyone make an informed decision on the worth or validity of the Bible. Other stories were more compelling, however. For example, I liked Emile Cailliet's story. Quoting Calliet, he writes:

I literally grabbed the book [the Bible] and rushed to my study with it. I opened it and "chanced" upon the Beatitudes. I read, and read, and read--now aloud with indescribable warmth surging within.... I could not find words to express my awe and wonder. And suddenly the realization dawned upon me. This was the book that would understand me! I needed it so much, yet, unaware, I had attempted to write my own--in vain. I continued to read deeply into the night, mostly from the Gospels. And, lo and behold, as I looked through them, the One of whom they spoke, the one who spoke and acted in them, became alive in me. (23)

© Becky Laney of Operation Actually Read Bible
Posted by Becky at 11:53 AM