Book Review: A Light in the Window 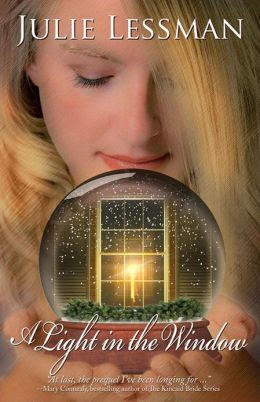 A Light in the Window is a prequel to Julie Lessman's A Passion Most Pure; it is the parents love story, Patrick and Marcy. Pride and prejudice both abound in this historical romance novel.

Patrick and Sam are two best friends "in love" with the same girl. Marcy knows that both men have a horrid reputation; they are 'bad boys' that may attend church once a week, but, live however they please the rest of the time. Patrick she thinks is especially good for nothing because of a scandal involving his father. Sam, however, receives a bit more grace because on the surface his family life is absolutely perfect. And Marcy should know, she's spent enough time with them. Sam's sister is her best, best friend.

Marcy treats Patrick horribly. She's rude and outspoken. Oh, she apologizes now and then for speaking her mind and being honest with her perceptions. And, in time, her perceptions change and she's just as honest with her new opinions as she was with her old. But Marcy is definitely prejudiced against a certain Patrick.


“Of … l-like m-mind?” He reached to fondle a loose strand of her hair, the flick of his gaze to her mouth stealing her air. “A woman I can love who’s willing to wait until I’m ready to say, ‘I do.’” Her heart beat faster than a thousand hummingbirds splashing in the sugar water of her mother’s feeder in the garden. Until he’s ready to say I do? “Are you, Marcy?” he whispered, thumb tracing her jaw. “Am I what?” Her voice cracked. “The kind of woman who’s willing to wait?” Her lips trembled as a lump dipped in her throat. “I don’t understand, Sam—what do you mean?” “I mean you’re the kind of girl I hope to marry …” he said softly, drawing her close with the firm press of his hand at the small of her back. “Someday. But I need to know—if you and I are meant for each other, are you willing to give me time? Will the babies of St. Mary’s be enough until I can put a ring on your hand?”

She jerked away, so stunned by his declaration, she could barely breathe. “Are you … proposing, Sam? Is that what you’re saying? Because this is no laughing matter.” “I’m not laughing,” he whispered, caressing the side of her face with the palm of his hand, not a trace of humor to be found in his eyes. “You are the type of woman I want, Marceline—eventually. Both as my wife …” His gaze dropped to her lips while his fingers slowly twined in the loose hairs at the back of her neck, “… and in my bed.” Heat braised her cheeks, both at the boldness of his remark and the idea that marriage was even on the mind of a man like Sam O’Rourke. “Are you … serious?” “I am,” he said softly. “If we’re right for each other and you’re willing to wait, that is. So, I’m asking you again—are you? Willing to commit to me without a ring or engagement? A courtship of sorts, that may be years in the making?”

“I want you, Marcy, and I’m asking you again—are you willing to wait, to allow me to court you until we’re both ready to marry?” She stood paralyzed—afraid to say yes, afraid to say no … “Say, yes, Marceline ...” Cupping her face, his eyes sheathed close while he nuzzled her lips. The soft moan that left her throat was pure surrender. “Yes …”

Marcy is the last person to see the truth that is so evident to everyone else in the community. Sam and Patrick. Only one of them is worthy of her. One is a big pretender.

© Becky Laney of Operation Actually Read Bible
Posted by Becky at 9:29 AM