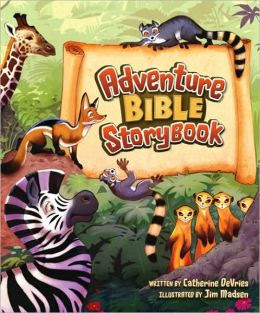 Twenty-three Old Testament stories. Twenty-eight New Testament stories. A good blend, I think. I definitely like that each story takes several pages which allows for more illustrations. So many Bible story books seem to limit stories to just two pages. The average story in this collection is SIX pages. The deluxe edition features the audio book with all the stories.


Noah swayed in his hammock, drifting in and out of sleep. The rain was coming down hard now. And the thunder sounded close. Noah could hear the squawks, oinks, woofs, moos, baa-as, and roars of all the animals in his noisy neighborhood. It wasn't easy living here. Suddenly the ark lurched, and Noah fell out of his hammock. It was time to milk the cows anyway. (18-19)

From Esther and the King:


Esther twirled her dress in a perfect circle and smiled at the king. Of all the women in the beauty contest, the king liked Esther the best. So Esther became the queen. (118)


A woman rode a donkey into Bethlehem. Her tummy was huge. Very soon she would give birth to her baby. Joseph and Mary went to every inn to see if there was any room for them to stay. But at all the doors, the people just shook their heads no. Then a door opened. A man peered out and noticed Mary. "Looks like she needs a place to rest," he said. "You can stay in my stable out back. It's not much, but at least it's warm and dry." (136-37)


The calm night of sailing across the Sea of Galilee had turned into a stormy disaster. The disciples controlled the boat as best they could, but water was pouring in and they were afraid. (192)

© Becky Laney of Operation Actually Read Bible
Posted by Becky at 9:43 AM