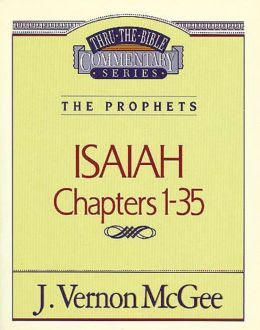 I have enjoyed reading several J. Vernon McGee books this past year. I was happy to pick this one up at a bargain price (less than $2!) this past month. Isaiah has always been one of my favorite Old Testament books, so I was excited to spend time with this one.

The book examines chapter by chapter (almost verse by verse to a certain degree, in a very conversational manner) the contents of Isaiah. It is certainly informative, for example, he pinpoints which prophecies were local and immediate, which prophecies were about the first coming of the Messiah, which prophecies were about the second coming of the Messiah. If you've read Isaiah, you know some fall into at least two categories at the same time. What surprised me was how much of Isaiah focuses on the second advent, the second coming, the millennial reign of Christ. I, of course, knew that some chapters did. I could recognize those on my own. But McGee showed me that there were even more than I thought.


Why did God give so many prophecies concerning the first coming of Christ to earth? There is a logical and obvious answer. The coming of the Lord Jesus Christ to earth was an important event. God did not want the children of Israel to miss Him. God marked Him out so clearly that Israel had no excuse for not recognizing Him when He was here on earth.
Let me use a homey illustration. Suppose I am invited to your hometown. You ask me, "When you arrive at the airport, how will I know you?" I would write back and say, "I am arriving at the airport at a certain time on a certain flight. I will be wearing a pair of green-checked trousers and a blue-striped coat. I will have on a big yellow polka dot necktie and a pink shirt with a large purple flower on it. I will be wearing one brown shoe and one black shoe and white socks. On my head you will see a derby hat, and I will be holding a parrot in a cage in one hand, and with the other hand I will be leading a jaguar on a chain." When you arrive at the airport, do you think you would be able to pick me out of the crowd? (ix)

Let me illustrate how ridiculous the double or triple Isaiah hypothesis really is. Suppose a thousand years from today some archaeologists are digging in different parts of the world. One group digs in Kansas, another in Washington D.C., and another group digs in Europe. They come up with the conclusion that there must have been three Dwight Eisenhowers. There was General Eisenhower, the military leader of the victorious Allied forces of World War II in the European theater. There was another Eisenhower who was elected president of the United States in 1952 and 1956. There was still another Eisenhower, an invalid and victim of a heart attack and of a serious operation for ileitis. This illustration may seem ridiculous to some people, but that is exactly how I feel when I hear the critics talk about three Isaiahs. (xii)

In the thinking of the world, God has been removed from the throne of judgment. He has been divested of His authority, robbed of His regal prerogative, shorn of His locks as the moral ruler of His universe. He has been towed to the edge of the world and pushed over as excess baggage. This is a blasphemous picture of God! He is still the moral ruler of His universe. He is still upon the throne of justice; He has not abdicated. He punishes sin. (18)

Each year as we stand on the threshold of a new year, we say we are going to do better. We have been saying the same thing for years. My question is, "Are you fit today for heaven?" Suppose God took you to heaven as you are right now. Would you be fit for heaven? I cannot answer this question for you, but God is going to have to do a great deal of repair work on Vernon McGee to make him ready for heaven. That is what life is all about: it is a school to prepare us for eternity. Many people make a sad mistake to think that this life is all there is. Preparation is made on earth for eternity. Suppose God took you to heaven as you are, would you be a square peg in a round hole? I am afraid I would be. Beloved, it does not yet appear what we shall be. He is going to have to make some changes. (51)

God will not compromise with evil. I thank Him for that. He will not compromise with evil in your life nor in my life, because evil and sin have brought all of the sorrows in this world. Sin is that which puts gray in the hair, creates the tottering step and the stooped shoulder. It is the thing that breaks up homes and lives and fills the grave. I am glad that God does not compromise with it. God says that He hates sin and He intends to destroy it and remove it from this universe. Today our God is moving forth uncompromisingly, unhesitatingly, and undeviatingly against sin. He intends to drive sin from His universe. That is what God says. Oh, how desperately the church needs another vision of God, not just of His love, but of His holiness and righteousness! Because God is holy, He moves in judgment against sin--and He has never asked me to apologize for Him. So I won't. God is angry against sin, and He will punish those who engage in it. He says He will. (68-9)