Book Review: In My Place Condemned He Stood 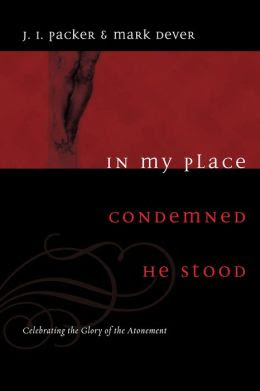 In My Place Condemned He Stood: Celebrating the Glory of the Atonement. J.I. Packer and Mark Dever. 2008. Crossway. 192 pages. [Source: Review copy]


The subject--the atonement--is an essential one. The purpose of this book is to be "a creative exposition" of the doctrine penal substitution. The book is very effective in that regard! Because these chapters consist mainly of previously published materials, because these chapters are written by two different men, the book, as a whole, varies in tone and style. For example, "The Heart of the Gospel" is written for EVERYONE. It is straight-forward and splendid. "What Did The Cross Achieve?" on the other hand is very, very different in nature. It is scholarly. It is written for a much smaller audience, a highly educated and sophisticated audience. It reads like a dissertation. Both chapters cover the same subject, but, their intended audiences make these two chapters read very differently!

I would recommend this one. I definitely liked some chapters better than others. But all chapters were insightful and Scripture-rich. My favorite chapter was definitely J.I. Packer's The Heart of the Gospel.


It is impossible to focus the atonement properly until the biblical mode of Trinitarian and incarnational thought about Jesus Christ is embraced. The Trinitarian principle is that the three distinct persons within the divine unity--the Father, the Son, and the Holy Spirit--always work inseparably together, as in creation, so in providence and in every aspect of the work of redemption. The incarnational principle is that when the Son took to himself all the powers and capacities for experience that belong to human nature and began to live through his human body, mind, and identity, his sense of being the Father's Son was unaffected, and he knew and he did his Father's will, aided by the Spirit, at all a times. It was with his own will and his own love mirroring the Father's, therefore, that he took the place of human sinners exposed to divine judgment and laid down his life as a sacrifice for them, entering fully into the state and experience of death that was due to them. Then he rose from death to reign by the Father's appointment in the kingdom of God and from his throne to send the Spirit to induce faith in himself and in the saving work he had done, to communicate forgiveness and pardon, justification and adoption to the penitent, and to unite all believers to himself to share his risen life in foretaste of the full life of heaven that is to come. Since all this was planned by the holy Three in their eternal solidarity of mutual love, and since the Father's central purpose in it all was and is to glorify and exalt the Son as Savior and Head of a new humanity, smartypants notions like "divine child abuse" as a comment on the cross are supremely silly and as irreverent and wrong as they could possibly be (22)

How then did the cross actually redeem us, through Jesus' death? By reconciling us to God, ending the alienation and estrangement that were previously there, linking God and us together in new harmony, replacing enmity between us with friendship and peace, by means of the putting away of our sins. (See Rom. 5:11; Col. 1:19-22). So how did the cross actually reconcile us to God, and God to us? By being a propitiation, ending God's judicial wrath against us. (See Rom. 3:24) And how did the cross actually propitiate God? By being an event of substitution, whereby at the Father's will the sinless Son bore the retribution due to us as guilty ones. (See 2 Cor. 5:21; Gal. 3:13; Col. 2:14)

From The Heart of the Gospel


Has the word propitiation any place in your Christianity? In the faith of the New Testament it is central. The love of God, the taking of human form by the Son, the meaning of the cross, Christ's heavenly intercession, the way of salvation--all are to be explained in terms of it, as the passages quoted show, and any explanation from which the thought of propitiation is missing will be incomplete, and indeed actually misleading, by New Testament standards… And a gospel without propitiation at its heart is another gospel than that which Paul preached. (32) [Rom. 3:21-26; Heb. 2:17; 1 John 2:1-2; 1 John 4:8-10.]

God propitiates his wrath by his own action. He set forth Jesus Christ, says Paul, to be a propitiation; he sent his Son, says John, to be the propitiation for our sins. It was not man, to whom God was hostile, who took the initiative to make God friendly, nor was it Jesus Christ, the eternal Son, who took the initiative to turn his Father's wrath against us into love. The idea that the kind Son changed the mind of his unkind Father by offering himself in place of sinful man is no part of the gospel message--it is sub-Christian, indeed an anti-Christian idea, for it denies the unity of will in the Father and the Son and so in reality falls back into polytheism, asking us to believe in two different gods. But the Bible rules this out absolutely by insisting that it was God himself who took the initiative in quenching his own wrath against those whom, despite their ill-desert, he loved and had chosen to save. (36)

The gospel tells us that our Creator has become our Redeemer. (40)

The peace of God is first and foremost peace with God; it is the state of affairs in which God, instead of being against us, is for us. (49)

From What Did The Cross Achieve?


The notion which the phrase "penal substitution" expresses is that Jesus Christ our Lord, moved by a love that was determined to do everything necessary to save us, endured and exhausted the destructive divine judgment for which we were otherwise inescapably destined, and so won us forgiveness, adoption, and glory. To affirm penal substitution is to say that believers are in debt to Christ specifically for this, and that this is the mainspring of all their joy, peace, and praise both now and for eternity. (77)

From Nothing but the Blood


Historically understood, Christ's atonement gives hope to Christians in their sin and in their suffering. If we have any assurance of salvation, it is because of Christ's atonement; if any joy, it flows from Christ's work on the cross. The atonement protects us from our native tendency to replace religion with morality and God's grace with legalism. Apart from Christ's atoning work, we would be forever guilty, ashamed, and condemned before God. (102)

© Becky Laney of Operation Actually Read Bible
Posted by Becky at 11:08 AM