Book Review: For Such A Time 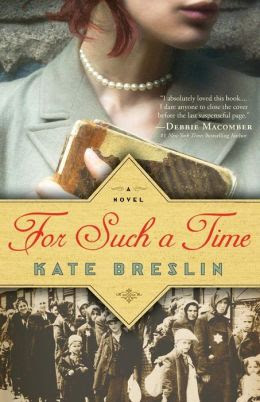 I really loved Kate Breslin's For Such A Time. This historical romance is set in Czechoslovakia during World War II. Our heroine is a Jewish woman (Hadassah Benjamin) who was rescued from execution by a Nazi soldier, Colonel Aric von Schmidt. Her papers--false papers--identify her as Stella Muller. His reasons for saving her are a bit ambiguous. He doesn't appear to suspect that she is, in fact, Jewish. She's not taking chances on telling her rescuer either. Let him think whatever he wants. She is taken into his home where she is treated well: given food and clothes and the time to rest and recover physically. She is officially his secretary. And she does do secretarial work for him. That isn't exactly a lie. But he hopes for more. He doesn't expect more--demand more. But he's hoping that she's falling for him as he's falling for her. There's no doubt that his fellow soldiers and perhaps others in the community think that she is in fact his mistress. Is she attracted to him? The truth, the absolute truth, yes. She knows that she perhaps shouldn't "allow" such traitorous thoughts to take root. But she can't help it. He even wants to marry her!

Just as she has secrets, big secrets, she's keeping from him. He is keeping big secrets from her. She is hoping to "rescue" a small handful of Jews through her work. She is given on occasion the task of typing up the lists of those Jews from the ghetto to be deported. She know she can't rescue ALL. Each page contains a hundred names or so. If half the names vanished from the list, she'd be found out very quickly indeed. But eight names per page, well, she's hoping that saving a hundred out of almost two thousand is worth it. She gets away with it at least once. But her "luck" may not continue...

His secrets, well, he knows that in a matter of weeks what the BIG plan is to solve "the Jewish problem." And his orders have him very involved--too involved for his liking. He knows that she could no longer like him or respect him if she knew the truth.

I loved this one. Not only did I care very much about the hero and heroine, I also liked some of the "minor" characters. Stella really really comes to love a Jewish boy working as a servant in the house. His name is Joseph. And she wants more than anything to rescue him and have him be a part of her life forever. She wants to mother him, to protect him. And then there is her uncle...

I definitely recommend this one!

© Becky Laney of Operation Actually Read Bible
Posted by Becky at 10:05 AM

I'm really keen to read this book.
I was fascinated to find out I have actually been to the transit camp, it said this book was set in.
One thing about Terizin is it's absolutely beautiful, the grounds.
Beth