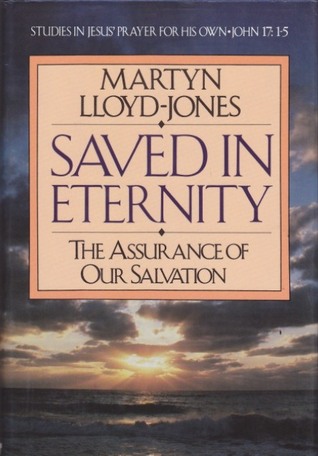 From the preface: The sermons in this book form the first part of a series on John 17 which Dr. Lloyd-Jones delivered on Sunday mornings in Westminster Chapel between 1952 and 1953. These particular sermons [Saved in Eternity] were preached between April and July 1952.

I have now read all four books in Lloyd-Jones' Assurance of Salvation collection. These four books explore the rich depths of John 17.

I always suspected that I would love, love, love, absolutely LOVE Martyn Lloyd-Jones work if only I could stop being intimidated long enough to immerse myself. And indeed I do love him!!! I find him very readable! His writing is rich in scriptural truth. His love for the Word of God is very evident in his writing. I also love the depth and substance in his sermons. They are meaty sermons, but, ever-relevant.

From "The Lord's Own Prayer"


A quaint preacher in the seventeenth century said what is, I believe, the eternal truth about this prayer. "It is the greatest prayer that was ever offered on earth and it followed the greatest sermon that was ever preached on earth." In a sense nothing can be added to that. (11)

If we had nothing but John 17 we would surely have more than enough to sustain us, because here our Lord has given us an insight into our whole position, and into everything that is of importance and of value to us while we are in this world of time. (13)

We sometimes think that prayer is simple, but it is not. The great saints of all the centuries are agreed in saying that one of the most difficult things of all is to learn how to pray. If any Christian has been feeling cast down because he or she has found prayer difficult, they must not be discouraged, because it is the common experience of the saints. (16)

What he has done for us is that he has satisfied the law and all its demands. It is amazing to me how people can look at and preach about Christ, his life and death and never mention the law. Unless the law of God is satisfied, there is no salvation. (19)


Prayer, in many ways, is the supreme expression of our faith in God and our faith and confidence in the promises of God. There is nothing that a man ever does which so proclaims his faith as when he gets down on his knees and looks to God and talks to God. (35)

There is no conflict between the sovereignty of God and prayer, for it is the sovereign God who has chosen to do his work in this world through praying men and women. (37)

From "The Glory of God in the Plan of Salvation"


We want a bird's eye view of the whole Bible, and the result is that we miss the doctrine. (44)

It is a tragedy that we tend to live as paupers in the spiritual realm, when God means us to be princes. (44)

From "It Is Finished"


God being God, cannot just forgive sin. Now the common idea about God, the one that we have instinctively, is that when we admit that we have sinned, all that is necessary is that we should come to God, say we are very sorry, and God will forgive us. But according to the Bible that is impossible, and I do not hesitate to use that word. As a preacher of the Christian gospel, I am compelled to say this and I say it with reverence: God, because he is God, cannot just forgive sin like that.
If you want me to prove what I am saying, this is how I do it. If God could have forgiven sin just by saying, "I forgive," he would have done so, and Christ would never have been sent into this world. The work that was given to him to do, this work, this assignment, this task, was given to the Lord Jesus Christ because, I say again, without it, God cannot forgive sin. He must not only justify the ungodly, he must remain just. The way of salvation must be consistent with the character of God. He cannot deny himself, he cannot change himself, he is unchangeable. (101)

He came to do certain things himself, and we are saved by what Christ has done for us, and not by what he tells us to do. (102)

He has done everything that is necessary for man to be reconciled to God. Have you realized, my friends, that this work is finished? (107)

The beginning of Christianity is the acceptance of this statement: "I have finished the work which thou gavest me to do." (107)

From "The Hour Is Come"


My friend, he came from heaven, he laid aside his glory, as we were considering earlier, in order to come to 'this hour.' He knew it from the beginning. He came to die, specifically to die. We have seen that, apart from that death on the cross, he cannot deliver me; that apart from the death on the cross, I say it again with reverence, even God cannot forgive man. The cross is absolutely essential, the cross was planned before the world was ever created. So the hour that produced the cross is the central, pivotal point, of history and God always knew about it, the Lord came for that hour. So we must never think of this hour as taking him by surprise, it was an hour that was appointed and determined, it was the crisis of the world itself. (113)

The cross of Jesus Christ makes this great proclamation. Unless I believe in him, unless I believe that his death at that hour is the only thing that reconciles me to God, I remain under the wrath of God. If I do not see that the wrath of God against my sin has been borne there by the Son of God, then the alternative is that I must live to experience the wrath of God: that is the essence of the Christian gospel. (120)

From "Filled With Life Anew"


To spend time in reading the Bible and in meditation is no burden to those who have eternal life. They delight in it, it is their greatest joy, because knowing God as they know him, they enjoy him. (169)