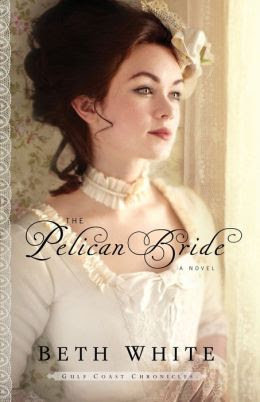 I liked Beth White's The Pelican Bride. It is a historical novel set during a time I'm completely unfamiliar with. It is set in the Louisiana colony circa 1704-05. Most of the characters are French, French Canadian, or Native American. (Several tribes are mentioned, I did not do a great job of keeping track of which character belonged to which tribe.)

The heroine of Pelican Bride is Genevieve Gaillain. She and her sister, Aimee, have come to start a new life in a new colony. These two women are part of a larger group of newly arrived French women. These are women who have agreed to marry with the settlers and soldiers. While some women rush straight into marriage with a soldier, and indeed seem to marry the first man who asks them, Genevieve and her sister appear to be more choosy. Especially Genevieve. The truth is that Genevieve has fallen for a man who is resistant to the idea of marriage. He has no intention of marrying "a Pelican bride." Let other men fight and gamble over the women. But Tristan Lanier can't stop thinking about Genevieve or that delicious crusty bread that she bakes. The two have a handful of conversations together; they decide to marry. But all is far from perfect. They only have one day and night together before he leaves on an oh-so-dangerous mission.