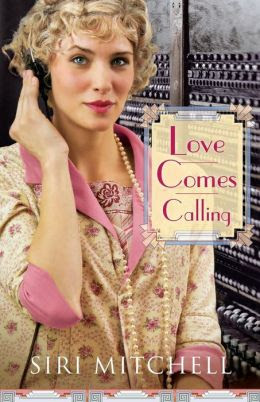 I liked reading Siri Mitchell's Love Comes Calling. I think I would have liked it even more if I hadn't predicted so early on the big misunderstanding of the heroine, Ellis Eton.

Ellis Eton is the heroine of Love Comes Calling. Ellis is unhappy. She may come from a wealthy family, she may be attending a prestigious woman's college, but, Ellis feels like she is a big failure who can only always disappoint the people in her life. Wanting to escape from the failure-feeling, Ellis has plans to run away to Hollywood and become an actress. But first she has to successfully save up some money. (Something that she's tried to do for several years, but, has always failed at.)

It so happens that Ellis Eton looks nearly-exactly like the daughter of one of her family's servants. (I forget if it is a cook, maid, housekeeper.) This person comes to Ellis asking a favor. She wants Ellis to take her place as a "hello girl" (telephone operator) for two weeks while she goes away. (She is trying to arrange the burial of her mother and find her father who is a fisherman; he's been on his boat, he doesn't know of the death). Ellis has never had to work, and is about as unskilled as can be. But with a brief amount of coaching, Ellis is as ready as she'll ever be to work the switchboard.

On her first day on the job, Ellis does horribly. Horribly is being generous. Her sloppiness doesn't go completely unnoticed, but it's not fully realized by her bosses either. Ellis so happens to have heard a conversation that she shouldn't have, a conversation about Ellis' boyfriend.

The rest of the book focuses on Ellis attempting to become a detective on top of everything else. There were scenes that were successfully cringe-worthy. I just didn't want to see what happened next because I was worried that Ellis' foolishness would lead to something awful--or awful humiliating.

One of the novel's strengths is in the setting. This one is set in Boston in 1924. World War I may be over, but, it is not forgotten. Their are men and women still struggling to adapt to this 'new world.' One of the characters, Jack, was a bit thought-provoking. He is a veteran with a lot of unanswered questions. Why did he survive? Why was he the 'lucky' one? Is there any meaning, any purpose to life? Do our choices matter? Jack is not the proper hero of this one. But I did find his scenes interesting. (Griff is our proper hero.)

Prohibition is the subject of this one, the whole idea of CAN morality be legislated and/or enforced? SHOULD morality try to be enforced onto a society, any society? Should people try to control what other people do? Most of the characters agree that drinking irresponsibly is dangerous and "bad." But all struggle with the notion of Prohibition itself and all the things it leads to.

© Becky Laney of Operation Actually Read Bible
Posted by Becky at 10:11 AM