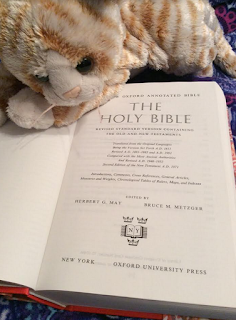 In the beginning God created the heavens and the earth. The earth was without form and void, and darkness was upon the face of the deep; and the Spirit of God was moving over the face of the waters. Genesis 1:1-2

About the RSV: The Revised Standard Version was a revision of the American Standard Version of 1901. The New Testament was released as early as 1946. The Old and New Testaments together were published in 1952. The translation went through several updates becoming finalized, I believe, in 1977.

According to Wikipedia, the VERY first copy of the RSV to come off the press was given to Harry S. Truman in September 1946. It was released to the general public a few days later.

Not every Christian embraced this new translation especially regarding the Old Testament. A strong reaction against this NEW translation in part led to a King-James-Only Movement. The fuss was over how Isaiah 7:14 was translated.

Therefore the Lord himself will give you a sign. Behold, a young woman shall conceive and bear a son, and shall call his name Immanuel. Isaiah 7:14

Some pastors preached sermons and wrote pamphlets against this "horrid" "modern" translation. A few even made a spectacle of themselves by burning it.

My thoughts: This is the fifth Bible I've read in 2017. I was not aware of the controversy before I started reading it! I didn't always love, love, love how they translated particular verses. But I wouldn't have been an angry protester, at least I don't think! But then again, I did get quite upset with the Common English Bible over how they translated a verse in Genesis, so maybe I would have been.

I CAN ONLY IMAGINE the fuss that would have resulted if the MESSAGE had been published in 1952. It would actually be a little fun to imagine the uproar.
© Becky Laney of Operation Actually Read Bible
Posted by Becky at 7:30 AM